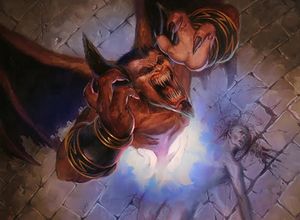 "Curse of Doom" in the TCG.

Bane of Doom (BoD) is a warlock Bane that causes Shadow damage every 15 seconds over the duration of 1 minute. Each tick has a 20% chance of summoning a Demon Guardian.

Prior to Patch 4.0.1, Bane of Doom was known as Curse of Doom. Once cast, it marked a target with a 60 second debuff. It damaged at the end of its count down, and had a small chance of summoning a Doomguard, which would need to be Enslaved. The spell could not be cast on players, was unable to crit, and had a 60 second cooldown.