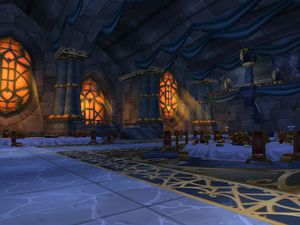 The Banquet Hall in Karazhan is the location of Moroes, Medivh's former manservant. This grand room used to hold fine dinners with guests of the kingdom, but now it is the scene of a macabre revisitation by numerous ghostly remnants, with Moroes as the presiding boss. In the Banquet Hall, there is currently a spectral party where undead nobles of Darkshire are waiting for Medivh. Among them there is Ebonlocke, who is very disappointed about the party.