Banshees are incorporeal undead elf women, known for their unholy screams and the unsettling ability to possess the bodies of their enemies. Highborne and night elf banshees have existed since the time of the War of the Ancients,[1] but many were also created when the Scourge invaded Quel'Thalas and slaughtered the majority of the kingdom's high elf inhabitants during the Third War. Many banshees now serve the ruler of the Forsaken, the "Banshee Queen" Sylvanas Windrunner.

The male counterpart of the banshee is the spectre.[2] 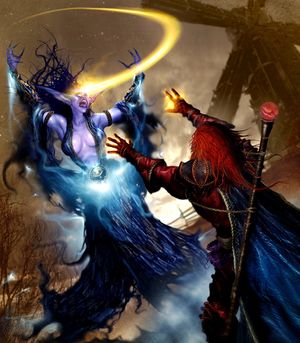 [Smite] on a banshee.

Banshees were once beautiful female night elves who were brutally murdered by demons during the fall of Kalimdor. Their restless spirits were left to wander the world for many ages in silent, tortured lamentation. Over the years they became jealous of the living and seeded a deep hatred for all life. Yet when the Lich King, Ner'zhul, became aware of them, he gathered them together and promised them vengeance upon the living. Ner'zhul gave them terrible voices so that the living would finally hear their timeless anguish. Thus, the banshees pledged themselves to the undead cause and began serving as valuable warriors in the Scourge.[1]

A large amount of high elf banshees were raised by the Scourge during Arthas Menethil's conquest of Quel'Thalas during the Third War. The most notable of these victims of the undead was the Ranger-General of Silvermoon, Sylvanas Windrunner, who was killed and raised by Arthas himself, though she later managed to reclaim her physical body. When the Lich King's grasp of the Scourge began to weaken some time after the war's end, Sylvanas and several of her undead servants broke free from the Scourge and eventually managed to establish the Forsaken.

The spectral banshees can fly and are fond of hammering their enemies with tortured blasts of sonic force. Their unnerving, unholy screams can be heard from miles away.[1] 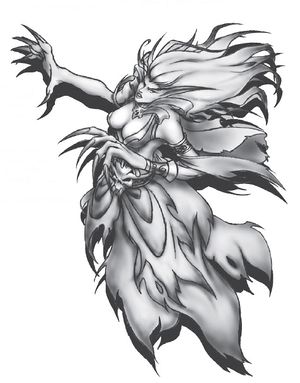 A banshee in the Horde Player's Guide.

When the Burning Legion and the kaldorei clashed in the War of the Ancients, 10,000 years ago, many night elf women fell. Their brutal murders returned them as banshees, and for millennia they wandered the world in lamentation, losing ever more of their dwindling sanity. Eventually, the Lich King, Ner'zhul, learned of their existence and recruited them into the Scourge. Banshees fought in the Third War alongside other undead, and when Arthas attacked Quel'Thalas, he found that he could make banshees of high elves as well.[5] After the Third War, the Lich King lost control of some of the banshees, including their queen Sylvanas Windrunner. Not long after Arthas raised her as a banshee, she broke from his control, taking fellow banshees with her. She regained her physical body and established the Forsaken. This act gives many banshees hope, and a strong cadre of free banshees can now be seen serving with the Forsaken. Most banshees still remain enslaved to the Lich King's will though, and can be found throughout the Plaguelands. Many wild, unaffiliated banshees exist.[5]

Although uncommon, according to Manual of Monsters, it appears that it is possible for human women, and even men from other races, to become banshees upon their undeath.[6]

"Banshee" is an acquired template in the Warcraft RPG.

While banshees were originally exclusively elven women, characters such as Blind Mary, Nissa Agamand, and Forlorn Spirit, who are undead female humans using the banshee model, could imply that it is no longer the case.[7]

Several Highborne also use the banshee model, but they could simply be intended to be regular ghosts.

One point for speculation is that they use the same models as the elven banshees, making them appear elven. However, it may simply be a matter of Blizzard not making special in-game models for these few and relatively insignificant characters, leaving them to use the elven models, and this in itself could be considered confirmation that they are indeed banshees. Alternatively, these NPCs may in fact just be ghosts, although most ghosts would use the model of a transparent form of their race, and Blizzard appear to have specifically chosen to depict these NPCs using the banshee model. In Warcraft III: Reign of Chaos, the enemy known as "ghost", seen in places such as the Barrow Deeps, used the banshee model as well.

Strangely enough, the updated banshee model introduced in World of Warcraft: Legion has human ears. It is used for all banshees, new and old, even those that undoubtedly were elves in life.

The banshee is a female spirit in Irish mythology, usually seen as an omen of death and a messenger from another world. They are believed to herald the imminent death of a person with loud shrieks and wails.