Barathen Wrynn, nicknamed Adamant for his bravery during the Gnoll War,[2] was the son of King Landan Wrynn and the father of King Llane Wrynn I. He was the ruler of the prosperous and peaceful Kingdom of Stormwind from at least 75 years BDP[2] up until his death in the Gurubashi War the year 18 BDP.[3] His wife was Lady Varia, and their only child was Llane Wrynn, heir to the kingdom.[4]

For many years, the kingdom of Stormwind prospered. However, threats soon emerged. Packs of gnolls began launching raiding parties against various villages, farmsteads and convoys, and in response, Stormwind sent knights to patrol the roads and keep the beasts in check. However, the gnolls remained a constant danger, and during the reign of King Barathen Wrynn, 75 years prior to the First War, the threat spiraled out of control. Garfang, alpha of the Redridge pack, had spent years conquering the other tribes, and under his leadership the gnolls began launching attacks on Stormwind City itself. Thus, the Gnoll War began. Barathen beseeched the other human kingdoms for aid, but received none, and so decided to take matters into his own hands. Taking a small party of armored knights with him, King Barathen waited for the next gnoll assault to begin. When it did, the king and his knights rode away from Stormwind and east into the Redridge Mountains. As expected, Garfang had held nothing back for the attack, but did not himself accompany his forces into battle, leaving his camp exposed to attackers.[2]

When the royal party reached Garfang's camp, they battled the packlord and his personal guards for a full day and night, until Barathen himself sank his blade into the packlord's neck. Half of his knights had died, but the bold plan had payed off. Without a unified leader, the rest of the gnolls soon fell to infighting, and before long had killed too many of their own kind to continue pushing into human lands. This allowed King Barathen to rally his soldiers, launch an attack on the Redridge Mountains and decimate what remained of the hyena-like creatures. Though scattered packs remained in the far reaches of the land, the gnolls would never again be able to pose any actual threat to the kingdom. The war was over, and Barathen, known thereafter as the Adamant, was celebrated as a hero.[2] As a result of the Gnoll War, Barathen and his people grew more isolationist, believing that they could deal with any threat on their own.[3]

When his son Llane was born, Barathen proclaimed the day to be a time for festival for the duration of his rule, and to mark the occasion, gave each citizen of Stormwind one gold sovereign. When Medivh fell into coma, Barathen and the Abbot of Northshire Abbey agreed to put the boy in care of the clerics in Northshire Abbey. After he awoke from the coma during Llane's Age of Ascension, the awakened boy gave the prince an hourglass that represented the duration of King Barathen's rule.[5]

Around 50 years later, 21 years prior to the First War, Stormwind's farmers and settlers had begun pushing south, claiming more and more territory near the jungles of Stranglethorn Vale, bringing them into conflict with the Gurubashi jungle trolls. The conflict escalated from small skirmishes to frequent raids by troll warbands. The now elderly King Barathen dispatched his forces in a defensive manner, commanding them to intercept raiding parties but forbidding them from carrying out retaliatory strikes into Gurubashi land. Barathen had no interest in a full-scale war with the trolls, but his son Llane wished to teach the trolls a lesson, even if that meant invading troll territory. The private debates between Barathen and Llane grew heated.[3]

Barathen's strategy was effective for a time, but one day a troll raiding party slipped through Stormwind's patrol lines and burnt three Westfall towns to the ground, barbarically killing dozens of humans. The incident became the talk of the kingdom, and Barathen met with Stormwind's lords and other nobles to discuss a response. The king was still focused on de-escalation and declared that Stormwind's armies would be bolstered but used only to strengthen their patrol routes, and that there would be no offensive against the trolls. Llane challenged him publicly, demanding the blood of Stormwind's citizens to be repaid in kind, forcing Barathen to publicly rebuke his son in order to end the protest. Llane was furious, not only for the humiliation but also for what he saw as his father's cowardice. His friend Anduin Lothar and many of Stormwind's soldiers felt similarly, but for the soldiers to disobey the king was unthinkable. Lothar, Llane and their friend Medivh decided to launch a secret mission into Stranglethorn to quickly put an end to the Gurubashi leader, Jok'non, before retreating. However, the battle with the trolls forced Medivh to unleash his full might to kill the trolls before the three men hurried back to Stormwind. While no trolls who had witnessed Jok'non's death had survived, it took little imagination for the trolls to guess who was responsible. The Gurubashi rallied under the banner of Jok'non's son, Zan'non, and marched to war against Stormwind, marking the beginning of the Gurubashi War.[3]

When the trolls arrived at the walls of Stormwind City, the human soldiers trembled at their numbers. Zan'non had learned some of his father's forbidden tricks, using them to transform a few Gurubashi into hulking berserkers who climbed Stormwind's walls and ripped its soldiers to pieces. The death toll on both sides mounted quickly, and old Barathen knew that it would take a miracle to break the Gurubashi siege. Thus, he mounted a desperate counterattack with his personal guards, storming directly into the hellish front lines with the intent of taking Zan'non's head. He almost succeeded, but the odds were against him. King Barathen Wrynn died on the field of battle.[3]

Llane mourned his father's death but knew that the city now looked to him for guidance. Stormwind's forces had fallen into disarray and all seemed lost. Llane convinced Medivh to unleash his Guardian powers as he had once before, unleashing a storm of magic that killed the majority of the Gurubashi and their leaders, saving Stormwind. After the battle, Llane Wrynn succeeded his late father as King of Stormwind.[3] 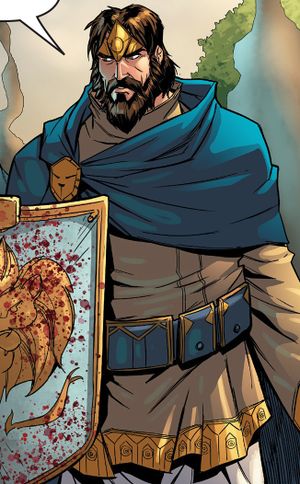 The King of Stormwind and father of Llane from a separate timeline[9] appears in the Warcraft film universe.