For the honor talent, see 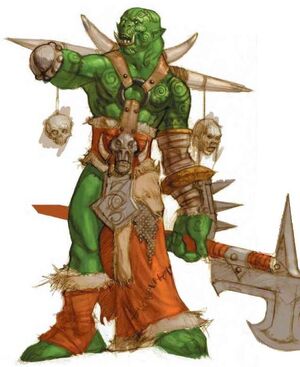 The barbarian is a ferocious warrior. He is uncivilized and brutal, relying on instincts, anger and raw physical might instead of tactics or fancy swordsmanship. His rage is frightening to behold, and it allows him to smash apart his enemies while ignoring all but the most brutal blows. He has a connection with nature's primal elements; this class is most commonly found among races that dwell in the wild.

They are the wild warriors of the steppes and wastes, they are the brutal berserkers and axe wielders of the orcs and the frightening, tattooed warriors of feral dwarven clans and human outcasts.[1]

Orcs and trolls have a strong history of favoring barbarians as fighters. The class' focus on anger suits the orcs well, especially when their demonic bloodlust overtakes them. Since the orcs have thrown off the shackles of the Burning Legion, this class is becoming less common among them, but it is still a noble and respected path. Trolls live in the wilds, and their strongest fighters are barbarians.

This class is less common among other races. Individuals who live far from civilization and those who allow their fury to guide them often become barbarians. Tauren and night elves are somewhat likely to become barbarians, as these races have close ties with Azeroth's wilderness. Barbarians are commonly seen among savage humanoids, such as ogres, gnolls, and furbolgs.[2] Some humans and half-orcs may have adopted a barbaric lifestyle on Kalimdor.[3]

Wildhammer dwarves are renowned for wild behavior and deadly skill at arms. They have a tendency to enter a fray armored with little more than a loincloth and body paint, and still come out covered only with the blood of their foes. They are fierce charging across the ground or when soaring atop gryphons; barbarians of other races seek to emulate Wildhammer dwarves' reckless ability to stay alive through sheer pluck while laying waste to their enemies. The iconic Wildhammer barbarian clutches his hammer and grins, showing gaps in his teeth. Feathers and beads are stuck in his sweaty hair and beard. "Come get some!" he shouts, before letting out a howl and charging forward.[4]

The standard image of a barbarian is some bloodthirsty crazy, probably an orc, shouting out incomprehensible threats and laying about him with a massive axe, while blood flies everywhere. Troll barbarians, however, devote their rage and strength to ranged weapons, flinging axes into their enemies with unerring speed. Perhaps the trolls' spirits look favorably on these warriors and enhance their abilities, for troll barbarians draw the magic of their weapons into their bodies and are able to impart it to other weapons. The iconic troll barbarian lopes out of the trees, his face painted in fierce tribal colors, his hair standing on end. He grips an axe or spear in each hand. "Say hello to my little friend!".[5]

Thoradin was a barbarian warlord.

Arnold Croman is a human paladin with the title Barbarian. When he entered the alternate Draenor, he could use savagery. Once recruited as a follower he doesn't use it.

There is also a naga Bloodwash Barbarian as well as Cornan.

Barbarians are referenced in World of Warcraft in the name of some weapons.