From Wowpedia
(Redirected from Barber Shop)
Jump to: navigation, search

A barbershop is a place where players are able to alter their character's hairstyle, hair color, and other facial features (such as earrings, facial hair, and horns). With Warlords of Draenor, players are also able to use the barbershop to choose new faces. 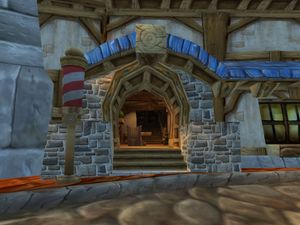 The barbershop in Stormwind City

Every race and gender has a selection of multiple hairstyle choices as well as hair color and race exclusive options. 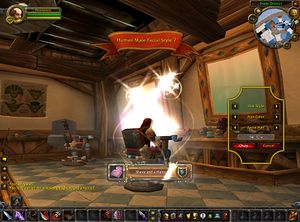 A human receiving the achievement within Stormwind's barbershop (outdated)

Changing your hairstyle will complete the achievement

[Shave and a Haircut].

Formerly the home of Sween Neetod the Barber, Jelinek Sharpshear has taken his place and this goblin gnome will be more than happy to give you a great shave and a haircut. The establishment later changed management to Genevieve, and she has Jelinek working in her new salon.