For the plaque in Scarlet Monastery, see Admiral Barean Westwind.

Barean Westwind of Kul Tiras was once a prominent member of the Scarlet Crusade. He was part of the Scarlet Fleet's disastrous expedition to Northrend, and was lost off the Frozen Coast. A large statue was erected in his honor in the Hall of Champions, located in the Scarlet Monastery in the Tirisfal Glades.

However, recent reports indicate that he is still alive and has joined the ranks of the Scarlet Onslaught. Only a few know that he is truly dead, and that his corpse is being used as a disguise for the dreadlord Mal'Ganis.

With the Scarlet Onslaught's arrival in Northrend, Admiral Westwind resides within the cathedral of New Hearthglen. He is seen alongside High General Abbendis. Abbendis was not expecting to see him there when the Onslaught arrived in Northrend, nor was she expecting him to suddenly take over command from her.[1]

Near the entrance to the city, one of the Onslaught Raven Priests remarks to an Onslaught Footman, "The Grand Admiral himself has come to see to our dedication. If I see you slacking on your post again, I will gut you myself." What his position of authority is within the ranks of the Scarlet Onslaught has yet to be seen.

In a later encounter in Icecrown, players face him once more and discover his true form: the Dreadlord Mal'Ganis. 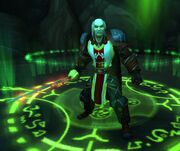