Baron Geddon is a fire elemental boss found in the Molten Core. He patrols near Shazzrah's spawn area while guarding the Rune of Zeth. 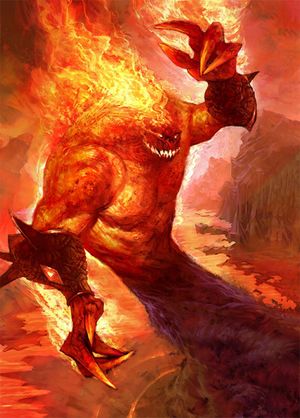 Baron Geddon in the TCG.

When Ragnaros was ripped from the Elemental Plane by the Sorcerer-Thane Thaurissan, several subjects from the Firelands followed in his wake. Baron Geddon fought against the titans and aided in the betrayal of Thunderaan, Prince of Air. The Firelord devoured the essence of the prince, but was unable to consume him entirely. Thus, the remaining energies were trapped within a talisman of elemental binding, which Ragnaros split into two perfect halves which he gave to his two lieutenants.[1] Rumour has it that Executus supplanted Baron Geddon, and the two have been rivals ever since. Although this rumour has yet to be confirmed, there is certainly no doubt that Ragnaros does not tolerate failure. Thus, the lesser flamewakers (and, of course, Baron Geddon) eagerly awaited a misstep by Executus, anticipating their chance to vie for the coveted attention of the Firelord.

Baron Geddon guarded one half of the talisman deep within the fiery confines of Blackrock Depths. Though the two have fought side by side for countless millennia, Baron Geddon harbored suspicious that Garr would seek to supplant him as the sole guardian of the talisman. Geddon, therefore, remained ever cautious of his former comrade. In fact, it was Shazzrah who sought to posses both halves of the talisman so that he might find a way to siphon its energies for his own use.[2]

Geddon also taught a fire elemental by the name of Lord Incendius to harness his destructive powers, but the baron never expected his protégé to grow so lethally efficient. Increasingly wary that Incendius might usurp him, Geddon sent the blazing elemental out of the Molten Core to guard the Dark Iron dwarves' fabled Black Anvil.[3]

Adventurers of the Horde and the Alliance stormed the Molten Core and defeated both lieutenants and managed to get the halves of the talisman.

Baron Geddon returned a few years later when Ragnaros assaulted Mount Hyjal, but adventurers once again banished him back to The Firelands.[4]

Baron Geddon is one of the eldest of all fire elementals, and he served as Ragnaros’ right hand during the beginning of the war against the titans. During one of the first battles against the then-unknown titan attackers, Geddon was defeated and forced into humiliating retreat. Ragnaros immediately demoted his commander, thinking that Geddon had been defeated by an inferior foe, since the Old Gods and their lieutenants had never yet met a challenge. His replacement was the flamewaker Majordomo Executus; Geddon was infuriated that a creature not purely of fire replaced him, a noble among the elementals. In an effort to regain his master’s faith, Baron Geddon planned the now legendary betrayal of Thunderaan the Windseeker. In the midst of a great battle, Geddon separated the massive lightning elemental from his allies, and together with Garr and Ragnaros, they ambushed the great elemental in an effort to steal his power.

Thunderaan was a powerful foe, even to an elemental lieutenant such as Ragnaros, and the Firelord was unable to completely destroy him as he had hoped. The three did manage to seal the Windseeker away, however, and imprison his essence in the talisman known as the

[Bindings of the Windseeker]. Ragnaros then broke the talisman in half and charged each of his lieutenants, Garr and Geddon, with keeping one half safe. It is said that if the halves are brought together again then Thunderaan might escape. However, Geddon did not win back his old position by his master’s side. Today, he waits and bides his time, hoping to grow strong enough to find a way to overthrow or discredit Majordomo Executus. Baron Geddon currently dwells in the tunnels of the molten core of Blackrock Mountain, where he keeps a tireless vigil against intruders. Both Baron Geddon and Garr draw their considerable might from the blazing runes carved deep into the floor of Molten Core.[5]

His appearance is a vaguely humanoid upper torso composed of pure flames. He is bound at what might be his wrists by two thick metal bracers. The lower portion of his body is a whirlwind of spinning flames that barely touch the ground. Baron Geddon opens combat using ignite mana on any obvious powerful spellcaster. He continues doing so until forced into melee or until every powerful spellcaster is under the influence of ignite mana. Baron Geddon then uses inferno to drive away nearby attackers, to a (presumably) safe distance. He uses living bomb on anything he can target until once again engaged in melee. Baron Geddon stays mobile, moving around with Spring Attack to keep his foes from bringing all of their melee to bear on him. He repeats the cycle — inferno, living bomb, and melee — whenever his foes get too close. He refreshes ignite mana when he suspects it has been dispelled. Baron Geddon can intensify the heat of his body to the point where flames erupt all around him. Baron Geddon can turn creatures into living bombs. The creature starts building up elemental energy and can feel the heat rising inside itself. If the effect is not dispelled, the creature explodes in flames, damaging those around him.[6] 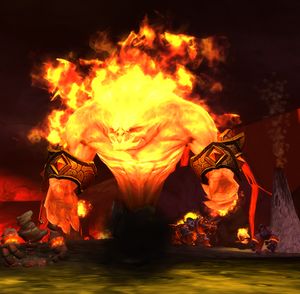 Baron Geddon is usually pulled to Garr's room for an easier fight. Typically the raid is setup in one of two ways:

When Baron Geddon starts his inferno all melee DPS needs to leave, even the MT. No matter how well geared the MT is, he will have a hard time surviving the inferno (unless he has over 315 FR)(and if he does survive it will cost a lot of healer mana). Beginning groups in MC that can't take the damage may want to have all players do ranged DPS and only allow the MT to get into melee range. Ignite mana should be dispelled, but not from warriors or rogues. Druids, if not otherwise engaged, can shift to bear or cat to eliminate both the mana loss and the damage taken from Ignite Mana until the debuff can be dispelled (see Notes section for a small problem with this strategy for Druids). Whoever is the living bomb MUST run away from the group and blow up by himself. Some groups have everyone else run away from the person with the bomb, but this method means all magic DPS and healing stops and is not recommended. It's suggested to try and run to one of the edges of the room where the ceiling is sloped down to stop one from flying up as high. There are places in the room where you don't even leave the ground when you explode. Most raids using a voice talking server (Ventrilo or Teamspeak) will have someone calling the name of the player with the bomb debuff. "Volk is the Bomb! Volk, run away from the group!" would be a typical response to a player named Volk being debuffed. "Alright. Lets rez up and rebuff." would be the result of Volk not getting away from the group. In the case of exploding in an open area, Mages and Priests can use Light Feathers to cast Slow Fall or Levitate, which will mitigate the falling damage and increase those classes survivability from being the bomb. Mages can also Ice Barrier, and Priests can Power Word: Shield prior to the explosion to help blunt some of the damage. Mages can use Ice Block and Paladins can use Divine Shield to remove this debuff from themselves. Druids can shift into bear form to absorb some of the explosion damage with their increased health then shift into cat form (if fast enough) while airborne to cut falling damage in half. Druids as well as Shamans can use Nature's Swiftness and Healing Wave to heal while airborne.

This fight is one of the easiest to MT in Molten Core. You must remember that he pulses 9 times each AoE. This fight will be frustrating the first two or three times, but it will quickly become cake when everyone figures out what's going to happen. Using CT_RA and Boss Mods will make identifying the bomb much easier.

You can also let a hunter use Eyes of the Beast to pull Geddon to the Garr room, where the raid is waiting for him standing on the rune, only the Tank will be outside the rune at this point. When Geddon comes the warrior aggroes him (there won't be needed more than a hit since the pulling pet have just walked into his aggro zone). After the initial aggro you let the tank get a lot of aggro, using Sunder Armor, whereafter the rogues and other warriors engage in melee combat, and when the pulses come they run out and begins shooting at him. I have never tried with the tank running out.

When someone get the bomb they run to the nearby pylons (near the tunnel where Geddon enters) where a priest is standing casting Power Word: Shield on the bomb. The priest should of course be well out of range of the bomb damage.

Combustion does not affect the crit chance of the Bomb, so don't bother using it if your plans are to suicide bomb your raid group.

With a higher level group setup (all necessary members past level 70 or up to 80), the main threat to the group is fall damage, since it scales based on your level to do equal damage. In this group setup, Garr's room is not the best idea due to the high ceiling.

Instead, the tank pulls Geddon into the hallway connecting Garr's room with Geddon's room. The low ceiling makes for zero fall damage. Necessary dispel to have available is magic dispel. Though the fight is not difficult, the mana burning debuff can still put healers in a very uncomfortable position, especially if the healers are not 80. Therefore, a paladin, priest, or warlock with felhunter is necessary to dispel the mana burn.

To deal with the bomb, the group stays together tightly in one spot while the tank holds Geddon towards the exit of the tunnel, leading away from Garr's room. When someone in the group gets the bomb debuff, they run down the tunnel to get away from the rest of the group. Once the bomb is gone, the group member runs back to the cluster of the rest of the party. If the whole group is in good shape, at least 70, and has a good healer, though, running with the bomb becomes rather unnecessary. 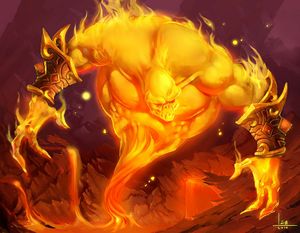 Although this is the artwork used to represent the

[82] Something that Burns quest in the TCG, the artwork is used to represent Geddon in Hearthstone.