Baron Rivendare is a powerful death knight in the service of the Lich King. Originally ruling over the city of Stratholme for the Scourge, he now leads the Four Horsemen of Naxxramas in place of Highlord Mograine.

In life, Baron Rivendare was a rich landowner in Stratholme and a friend to Kel'Thuzad who convinced him to join the Cult of the Damned.[1] During the Third War, after Arthas Menethil left for Northrend to hunt Mal'Ganis, Rivendare sent a shipment of grain to a village of Lordaeron where Thomas Thomson happened to be stationed at. When the villagers turned into mindless zombies, Thomas understood that Rivendare was a traitor and reported it to the rest of the Silver Hand paladins.[3] Rivendare eventually became a death knight and was placed in control of the burning remains of Stratholme.[1] When he became a champion of the Scourge, he condemned his favorite horse to join him in undeath.[4] At some point, he held Ysida Harmon captive.

While he held Stratholme against the Scarlet Crusade, Baron Rivendare later coordinated the efforts of the Lich King in the Plaguelands, and battled with agents of the Argent Dawn sent by Duke Nicholas Zverenhoff[5] to Stratholme to kill him and was defeated.[1] He was later part of the invasion of the Scarlet Enclave and eventually became a member of the Four Horsemen in Naxxramas. Although Naxxramas was raided by the Alliance and Horde,[6] his existence remains a mystery, it is likely that he will never fully be destroyed until Kel'Thuzad meets his end.[1]

After his defeat, Deathcharger's saddle was returned to Stratholme. The Deathlord of the Knights of the Ebon Blade sent champions on behalf of Salanar the Horseman to retrieve it, in order to him to create new steeds for the order's Four Horsemen. The ghost Vivian's Lament was the major obstacle to this goal.[7]

Baron Rivendare was originally the final boss of the undead side of Stratholme, until he was replaced by Aurius Rivendare in Cataclysm.

Rivendare appears in Acherus: The Ebon Hold next to Highlord Darion Mograine during the initial phases of the death knight intro questline, before moving to the Crypt of Remembrance. He gives the quest

He also appears in level 80 version of Naxxramas, replacing Alexandros Mograine as the fourth member of the Four Horsemen. 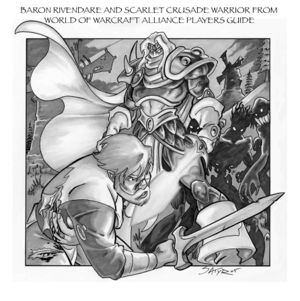 Once a wealthy human landowner, the plague corrupted Rivendare and he pledged himself as a death knight. Rivendare’s duty is to round up and murder any human survivors he can find, and he and his patrols do just that.[8]

He fell under Kel'Thuzad's sway and helped build and structure the Cult of the Damned. Rivendare then achieved the title and powers of a death knight. Now, Rivendare has his base in Stratholme. He serves Kel'Thuzad eagerly and exults in his power. One of his greatest joys is to instill corruption in others, especially paladins, and most especially members of the Argent Dawn. This knight is a regal figure — his face is pale but aristocratic, and white hair hangs to his shoulders, while a scarf covers his face. He crouches over a horned, skeletal steed, and purple runes glitter across his black armor, cloak, and runeblade. Baron Rivendare excels at melee combat (especially mounted warfare) and he knows it. At the earliest possible moment, he charges, whether afoot or mounted on his skeletal horse, Deathcharger. Then the baron unleashes the dreadful power of his runeblade. He prefers to fight with created undead to support him, and he uses death pact on these to recover hit points. Rivendare enjoys testing his mettle against fellow close combat specialists, but strikes at arcanists and healers if they prove bothersome.[citation needed] 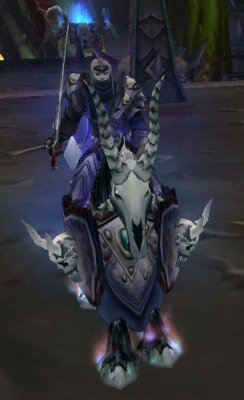 In the Scarlet Enclave

I am convinced that they are a unique lot amongst the humans. My theory is that they lack higher brain function, unable to logically assess a situation and calculate an outcome. One has only to make mention of the Light to get them frothing and battle ready - at which point they will rush headlong into any engagement with complete disregard for their own well being.