Baron Rivendare is a powerful death knight in the service of the Lich King. Originally ruling over the city of Stratholme for the Scourge, he now leads the Four Horsemen of Naxxramas in place of Highlord Mograine.

Once a wealthy human landowner, the plague corrupted Rivendare and he pledged himself as a death knight. Rivendare’s duty is to round up and murder any human survivors he can find, and he and his patrols do just that.[1] He coordinates the efforts of the Lich King in the Plaguelands. He currently battles with agents of the Argent Dawn sent to Stratholme to kill him. 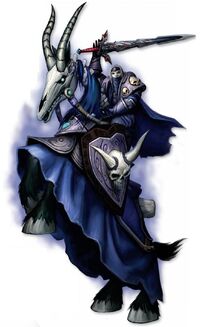 The Baron Rivendare fight presents two major challenges. First, his damage aura, which applies shadow damage to everyone in range. Second, he periodically spawns waves of skeletons from the bone piles scattered around his room. If these skeletons survive long enough, he casts Death Pact on them, killing them but healing himself.

To deal with the shadow aura, have your tank position the Baron against one wall of the chamber. Have your healers and ranged damage dealers stand on the opposite wall. This will allow them to stay out of range of the aura, avoiding the damage and casting interruptions. The tank and melee damage dealers will have to absorb the aura's damage. A priest can buff the group with

[Shadow Protection], or a paladin can use the

[Shadow Resistance Aura] to mitigate that damage. If the tank has any kind of shadow resistance gear, it's not a bad idea to equip it, although not absolutely required to defeat Baron.

The skeletons will almost always immediately aggro your healer. One of the easiest ways to deal with this is to have a class with high AoE damage, like a mage or a warlock in the group, and position them right next to the healer. They can then AoE the skeletons, which have moderate damage but very low hit points, as they rush towards the healer.

If you don't have a mage or a warlock in the group, there are other ways to deal with the skeletons. A priest with the

[Holy Nova] talent can kill the skeletons and keep the ranged party members healed at the same time, but this is very mana intensive, and he might need that mana to heal through the Baron's damage. A paladin can use

[Holy Wrath] as well, which will normally kill all the skeletons and hurt the Baron somewhat.

You can also try having members of your party use the [Stratholme Holy Water] that can be gathered throughout the instance. One bottle is generally enough for each wave of skeletons.

At the beginning of the Stratholme Undead side instance, there is an NPC you can talk to. If you have the Medallion of Faith, obtainable in the Stratholme Live side, you can give this to the NPC and he will assist you once you attack the Baron. This quest is repeatable.

Owners of pets must note to have their pets in passive mode as they enter the chamber, as their response to the shadow aura damage will likely trigger the encounter before the party is ready.

The Baron's Ultimatum is issued (45 Minutes)
Intruders! More pawns of the Argent Dawn, no doubt. I already count one of their number among my prisoners. Withdraw from my domain before she is executed!

10 minutes
You're still here? Your foolishness is amusing! The Argent Dawn wench needn't suffer in vain. Leave at once and she shall be spared!

5 minutes
I shall take great pleasure in taking this poor wretch's life! It's not too late, she needn't suffer in vain. Turn back and her death shall be merciful!
Ysida Harmon yells: Don't worry about me! Slay this dreadful beast and cleanse this world of his foul taint!

Time's up
May this prisoner's death serve as a warning. None shall defy the Scourge and live!

Clearing out the abominations
So you see fit to toy with the Lich King's creations? Ramstein, be sure to give the intruders a proper greeting.

Defeating Ramstein, the mindless dead and the Black Guard Sentries
Time to take matters into my own hands. Come. Enter my domain and challenge the might of the Scourge!

The Baron's Ultimatum completed
Ysida Harmon says: You did it... you've slain Baron Rivendare! The Argent Dawn shall hear of your valiant deeds!