Baros Alexston is a human located in the Stormwind City Hall, in Cathedral Square. Here, he serves as Stormwind City's chief architect.

During the events of the war in Draenor, Baros moves to the Lunarfall garrison in Shadowmoon Valley to serve its commander as the architect for their new fortress.

In his childhood, Baros lived and worked on the Alexston Farmstead in Westfall. At some point, his family's home was burned down and taken over by thieves. Baros's father was unable to save all their possessions, so he hid many away on the farm.

Baros eventually became a member of the Stonemasons Guild, where he worked with Edwin VanCleef, their main project being to rebuild Stormwind City after its destruction in the First War. Through years of work, the Guild completed the reconstruction of the city. Following a refusal by the Stormwind House of Nobles to compensate the Stonemasons as agreed, Edwin VanCleef (who had been elected Guildmaster) spoke out, demanding full restitution for their works. In response, the House of Nobles ordered the Stonemasons' Guild disbanded, leading to riots. VanCleef eventually led the Stonemasons out of the city in rebellion. It was at this time that Baros was offered the position of city architect if he did not join with VanCleef. Owing to certain ideological differences with the Guild, Baros chose to accept the offer.[3]

It is known that Master Mathias Shaw owes Baros a favor,[4] though it isn't known why.

World of Warcraft and the Cataclysm era

Baros's father told his son that he hid the family possessions. Baros eventually asked the adventurers of the Alliance to go to his former house and to find them, his first compass among them. He was also involved in the events leading to the exposing of Gregor Lescovar's betrayal. On the dead body of Edwin VanCleef, an unsent letter addressed to Baros was found.

Still working as chief architect in Stormwind, he hired Foreman Wick and the Royal Stonecutter's Guild under Mason Goldgild to remove a wall of Stormwind's Canals using explosives, and to build the gatehouse and road leading down into Stormwind Harbor. Later, Baros ordered the two to recover and repair Danath Trollbane's statue[citation needed]  in the Valley of Heroes, in the wake of the Cataclysm.

Alexston was put in charge of rebuilding Stormwind, after Deathwing's attack and kept the King Varian Wrynn informed of the progress and price.[5] 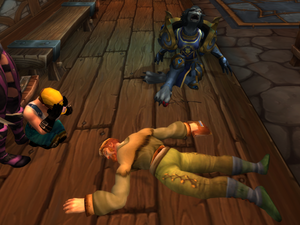 During the early stages of the war in Draenor, Baros was summoned by Khadgar to build Lunarfall, an Alliance garrison situated in Shadowmoon Valley. He expressed his eagerness to claim the land for the Alliance.

Following this, Baros served as the chief architect of the settlement for its commander, remarking on his previous work in rebuilding Stormwind City and stating that building Lunarfall would be "a walk in the park". Baros, however, soon found himself overwhelmed with the many stresses of managing the garrison. He is subsequently revealed to have a love interest in Lieutenant Thorn and often speaks fondly of her to the commander.

At some point, Jr. Surveyor Dorn told Baros about unusual seismic activity, but the architect was skeptical and sent the commander to investigate it.[6]

When the Burning Blade eventually attacked Lunarfall to retrieve the

[Heart of Gorgorek], Baros courageously threw himself in the way of a blade meant for Lieutenant Thorn, saving her, but costing him his life. Thorn is distraught over Baros's death (so much so that it is implied she will never revert from her worgen form again) and laments their lack of time spent together but resolves to continue on in his memory.

She does everything to the extreme - drinking, talking, rushing from one task to another...
She is a damn fine architect though, and probably the brightest student I've ever had.
I'll give her that.

I haven't worked up the courage to speak to her, but perhaps someday, she will know my name.

I'm just... not really good with women. Which she is an exceptional example of. A woman, that is. Although she is also a worgen. Which I also like. Oh, that long, silky fur...
Sigh...

Annoyed
Ahhh, I uh... <clears throat> hope you intend to pay the stonemasons for this work. That uh, didn't turn out so well last time.