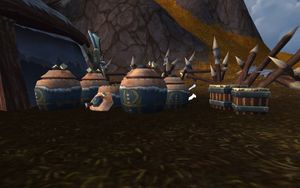 Those Ordo yaungol to the northwest have saved us the trouble o' havin' to make some bombs. They already have them there.

Let's put their explosive barrels to good use and destroy their oil-pumpin' machines, shall we?

Ho ho, that were a fine sight to see. I knew I should have gone up there with ya, <name>!

[87] In Tents Channeling and

[87] Pandaren Prisoners before heading out.

Start freeing pandaren and looting barrels. The barrels are unique, so pick one up, run it to a oil rig, place it, and run away and repeat. The four lieutenants are found in tents marked by fire lines exiting their central poles. When the fourth lieutenant is dead, In Tents will complete automatically. Turn it in and pick up

I love blowing stuff up. It's in my blood!

The yaungol to the west at Fire Camp Ordo have a ton of explosive barrels just lying around.

I say we put them to good use and destroy their oil-pumpin' machines while having some fun!

You can't tell me that wasn't fun, <name>! I knew I should have gone over there with you!

if completed at level 90)

Upon completion of this quest you will also gain: