From Wowpedia
(Redirected from Barrens (original))
Jump to: navigation, search

The Barrens is a large zone in central Kalimdor controlled mostly by the Horde. It is a massive savanna, with a few oases in the north-central region around the Crossroads. Before the upheaval, several large kaldorei cities stood here. Now, those brave few willing to scrape out a life on the arid plains inevitably run afoul of centaur warbands or quilboar raiding parties. Despite its often uninviting terrain and hostile inhabitants, the Barrens receive a good deal of interest from Alliance and Horde alike, as well as races native to Kalimdor. Trade routes crisscross the landscape leading to and from more inviting regions, and the most notable route is the Gold Road that runs north-to-south through the Barrens and beyond. Rumours suggest that precious minerals and treasure-filled ruins await those with the courage to investigate. 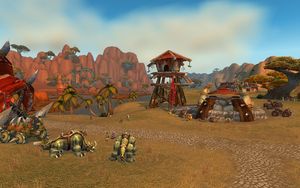 From Mulgore, follow the main road east out of the zone, then continue though Camp Taurajo (there is a Wind Rider Master in Camp Taurajo) and turn north through the Gold Road to get to the Crossroads. Get the flight path there too. You can also take the zeppelin to Orgrimmar from Spirit Rise in Thunder Bluff. It passes through the Barrens, and you can jump off (and survive!) while over Taurajo or the Crossroads.

If you are an orc or troll, go to Razor Hill (The small orc town south of Orgrimmar in Durotar) and go through the road west, then continue south through the Gold Road.

If you are a Forsaken or blood elf, take the goblin zeppelin to Orgrimmar, the Zeppelin Tower is just north of the Undercity, then go down to Razor Hill and use the same route as orcs and trolls.

Catch a boat to Ratchet from Booty Bay. Once there, get the flight path.

You can also take the boat to Theramore from Menethil Harbor and then run through Dustwallow Marsh into the Barrens. You will need to then run north and east to reach Ratchet.

An alternative method is to travel to Darkshore, then to Ashenvale. Walk all the way to the Mor'Shan Rampart without getting close to the guards. To the east there is a small entrance, free of Horde guards, that Alliance can go through.

The Barrens are a temperate and warm land.[1] It has hot rugged hills, plains (grassland), some rocky desert and rugged mountains.[2]

The Barrens are huge, one of the largest zones in the game. The land is mostly flat, with a few hills scattered throughout. The climate is harsh and hot, but survivable due to several lush oasis. With a stretch of coastline to the east, mountains to the northwest, plains to the west, forest to the north, marsh to the southeast, and the desert conditions to the south and northeast, the Barrens is surrounded by extremely varied landscapes.

The Barrens contain three instanced dungeons, the Wailing Caverns, Razorfen Kraul, and Razorfen Downs. The Horde entrance to Warsong Gulch is located to the north. There are two Horde aligned travel hubs in this zone: the Crossroads and Camp Taurajo, in addition to the flight path and boat in Ratchet available to both factions. There are no raid dungeons in the Barrens. 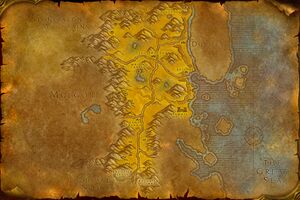 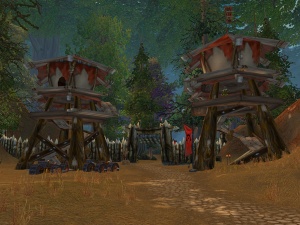 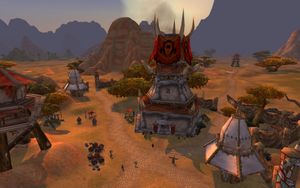 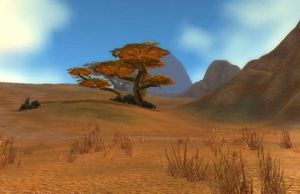 The Barrens at Day 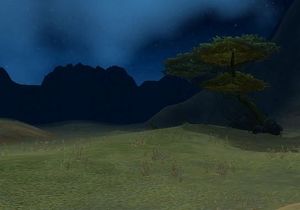 The Barrens at Night

The Crossroads is likely the biggest travel hub for Horde characters, with a total of 13 flight paths. Camp Taurajo, a secondary hub in the southern Barrens, is very useful for travel from one end of the zone to the other. Ratchet has both a Horde and Alliance flight master, and a boat which sails to Booty Bay in Stranglethorn Vale.

Flight paths from the Crossroads

Flight paths and boats from Ratchet 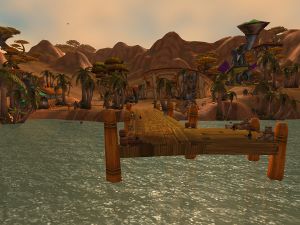 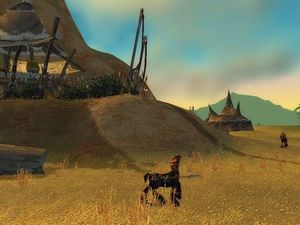 The Kolkar centaur in the Barrens.

The Barrens are home to several characters of note. At the Crossroads, Sergra Darkthorn sends promising young adventurers to prove their worth to the Horde by hunting local wild creatures. She is assisted in her efforts by Jorn Skyseer in Camp Taurajo, who also refers them to continue their quests in Thunder Bluff. And at his fortified camp west of the Crossroads, the beleaguered Regthar Deathgate fights a one-man battle to keep the savage centaur from breaking through the Horde defenses. The Barrens is also home to Mankrik who gives out the ever so infamous quest to find his wife.

Being such a huge zone, the Barrens has a wealth of quests for Horde characters between levels 10 and 20. Of particular note are the hunting quests given by Sergra Darkthorn at the Crossroads, which lead to similar quests in other zones. Many quests in the Barrens deal with fighting back the centaur and the quilboars. In addition, the Venture Company has taken a foothold in the northern Barrens and several quests involve investigating and causing trouble for them. 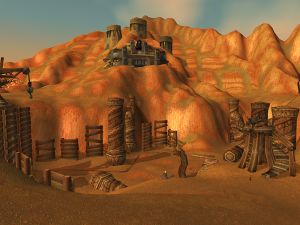 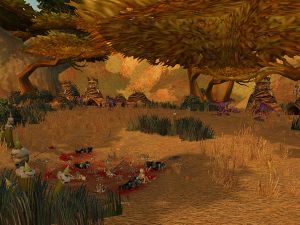 Horde players can completely bypass the Barrens if they wish by questing in Ghostlands, Silverpine Forest, and the Hillsbrad Foothills.

There are a number of reasons that a player might choose to do so: