Not to be confused with Barrow Dens (Winterspring). 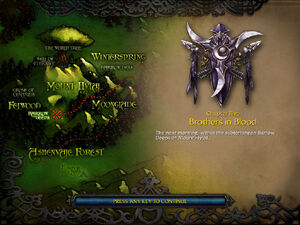 The location of the Barrow Deeps.

The Barrow Deeps is an ancient cave system beneath Mount Hyjal. It was the sleeping place of the Druids of the Claw for thousands of years until the return of the Burning Legion and the Third War. It also hosted prison vaults of the Watchers led by Maiev Shadowsong. 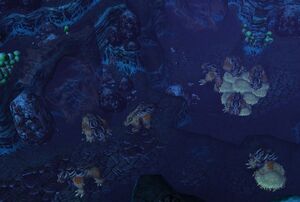 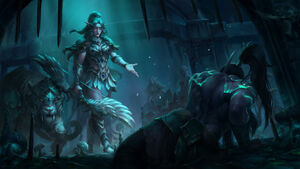 After awakening the Druids of the Talon from their slumber, Malfurion Stormrage and Tyrande Whisperwind entered the Barrow Deeps in search of the remaining Druids.

Deep in the caves, the night elves discovered giant spiders which were mutated by demonic corruption, and Tyrande saved a Furbolg Shaman after he had been bitten by the creature. They also came across the dwelling of The Largest Panda Ever, which would attack if disturbed.

Having nearly forgotten after all the years, Malfurion and Tyrande found an ancient gateway to the prison of Illidan Stormrage, Malfurion's brother. Despite adamant protests from Malfurion, Tyrande entered the prison. She believed that Illidan would be a powerful ally against the Legion so she split off from Malfurion and went in search of his imprisoned brother.

Malfurion continued on in search of the Druids of the Claw. He soon found them but they were lost and feral, their minds gone into atrophy. The Druids had slept for so long in their bear forms that they remained as such and even began to believe that they were bears. Malfurion freed them from their hibernation with the Horn of Cenarius. Grateful to be awake and in their right minds once more, the Druids of the Claw agreed to follow Malfurion in the fight against the demonic Legion.

Meanwhile, Tyrande had freed Illidan from his prison. When reunited with his brother, Malfurion refused to trust Illidan after his betrayal long ago but accepted the aid offered.[1]

It contained the Shrine of the Uberfish. 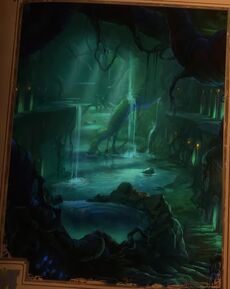 In the New Hearthstone Hero: Maiev Shadowsong video, Maiev called herself the warden of the barrow prisons. She says only one prisoner has escaped (presumably referring to Illidan Stormrage).

It is possible that the Barrow Deeps are only a small part of a vast cave network extending across most of Northern Kalimdor, connecting Felwood, Azshara, Moonglade, Winterspring, the Mount Hyjal and even with Ashenvale. In fact, the uncorrupted furbolgs of the Timbermaw Hold have a side tunnel, currently blocked by a door, which leads to an unknown location. These tunnels supposedly harbor a small portion of the furbolg race that have managed to escape corruption. In Warcraft III the Barrow Deeps were occupied by at least one tribe of uncorrupted furbolgs fueling speculation these tunnels and the Deeps may be one and the same.

With the arrival of the Cataclysm to Azeroth, Mount Hyjal is under heavy siege by Twilight's Hammer, as well as Ragnaros and his armies who are attempting to burn the now-regrowing World Tree. The Barrow Deeps are nowhere to be found, and the pre-Cataclysm entrance with similar style to Onyxia's Lair entrance is now missing (it was speculated by some fans to be the Barrow Deeps). However, Hyjal Barrow Dens are located very close to the World Tree, and are guarded by the Barrow Deeps Watchers. They also seem to serve as a prison. It is unknown if they are Barrow Deeps though, since geographically they are very far from the original Warcraft III entrance.