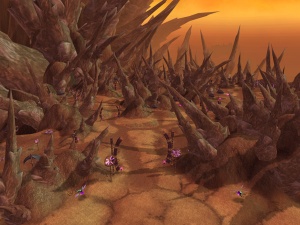 Bash'ir Landing is a camp of ethereals located in northern Blade's Edge Mountains, west of the former Felstorm Point. It is on the Crystal Spine and is only conventionally reachable by flight, but players that die near the plateau's border on the right side of Gruul's lair will appear in the Crystal Spine graveyard, where they may use the Spirit Healer. The area is named after Bash'ir and his subdivision of the Ethereum.

Every two hours the Sha'tari Skyguard assault and occupy the area surrounding a Crystalforge on Bash'ir Landing. This event offers access to items that cannot be purchased elsewhere. Players must guard a group of NPCs that are attacked by waves of increasingly powerful mobs. Players will receive access to progressively higher quality items the longer the NPCs stay alive. The

[Accelerator Module] allowing summoning of Bash'ir is obtained from this event.