Bashal'Aran are some ancient night elven ruins that can be found to the southwest of Lor'danel in northern Darkshore. During the Battle for Darkshore, the ruins can be captured and turned into a night elven or a Forsaken base of operations from where to launch an attack to the Alliance or Horde forces controlling the region.

As the canonical ending to the warfront was the Alliance victory,[1] Bashal'Aran should be in Alliance hands.

Before the time of the Great Sundering, Queen Azshara brought her favored servitors, those of the Highborne, to the twin towns of Ameth'Aran and Bashal'Aran.[2][3] To govern these towns, Azshara placed Athrikus Narassin, an elf of considerable magical power. His second, a mage known of his prowess in the arcane arts as much as with his physical abilities, was Asterion, who lived among the people of Bashal'Aran, and went many times to Ameth'Aran to see to the needs and wants of its people.[2]

Eventually, these two cities were destroyed when the first Well of Eternity was shattered. After the Sundering,[citation needed]  the powerful Athrikus Narassin used his craft to create a moonstone seal, forming a prison to hold Asterion by the means of magic.[3] The reasons why he was held in the ruins of Bashal'Aran by his former master are unknown, but from that point on, he began a long and painful life. When he died at some point, Asterion discovered to his horror that even as a specter he was still imprisoned.[4] 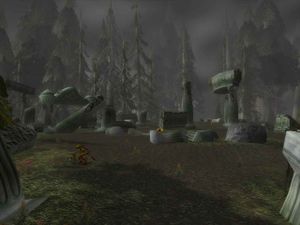 Thousands of years later, the ruins of Bashal'Aran were overrun with demonic minions - grells and satyrs - which had taken up residence in the area. These evil creatures fed upon the magical energies left among the ruins, their powers growing from the continued exposure. Even so, they never approached the shrine where Asterion was imprisoned.[5]

An Alliance adventurer managed to recover the seal imprisoning Asterion from the Deth'ryll satyr[6] and went south to Ameth'Aran where it could be destroyed, finally freeing the ghostly elf from a life of torment.[3]

After the Cataclysm, Bashal'Aran became inhabited by Cursed and Writhing Highborne, the ghostly remains of the denizens that once inhabited the city. Ranger Glynda Nal'Shea sent adventurers to the ruins to extinguish the Final Flame of Bashal'Aran so their ancestors' spirits could find peace.[7]

Arya Autumnlight came to the ruins to grant peace to these troubled spirits. However, the task put a heavy burden on her mind and she asked for help from an adventurer. With the traveler help, they managed to accomplish the task.[8]

A night elf druid by the name of Cerellean Whiteclaw sent adventurers to Bashal'Aran to destroy the spirit of her lover, Anaya Dawnrunner, in order to free her. Once done, the two lovers said farewell as Anaya's spirit faded away.[9] 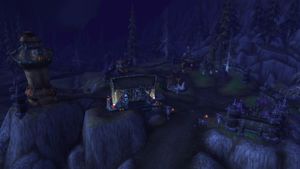 Bashal'Aran when controlled by the Horde.

It was at Bashal'Aran where Tyrande Whisperwind performed the ritual to become the Night Warrior.[10] Afterward, Bashal'Aran became the base of operations for the Alliance or the Horde during the Battle for Darkshore, depending on which faction is assaulting the zone.