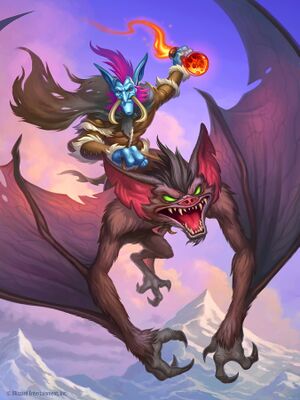 A troll batrider in Hearthstone.

“These wily ones will serve you well, mon. Their talent for destruction be mighty.”

— Vol'jin introducing a group of batriders to Rexxar[1]

Bat riders (also written batriders or bat-riders) are, as the name suggests, airborne troops that ride on giant bats. The fire-obsessed batriders of the Darkspear troll tribe are often used as reconnaissance for the Horde since the aftermath of the Third War.[2]

The Forsaken use bat riders known as dread-riders in their army.

Elven bat riders of the Illidari were seen on the Broken Shore.

The subject of this section did not make it out of the beta stages of Mists of Pandaria. 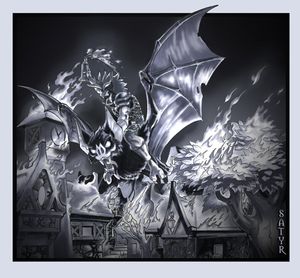 A bat rider in the Horde Player's Guide.

Expert at riding and caring for their special steeds — vampire bats — troll batriders are perceptive and dangerous foes. In battle, troll batriders use their flying mounts to swoop down upon enemy targets. When fighting alongside the Horde, batriders are often equipped with blazing torches and fire bombs with which they can set buildings, war engines, and other devices ablaze. These trolls wear simple leather vests of deep blue, studded with the teeth of various creatures, covering their lean bodies, leaving their taut muscles of their pale, sea-hued arms exposed. A thick belt around the creatures' waist holds several axes as well as a simple black scabbard with a short but wide sword. In wartime, the Horde sends batriders on missions against specific enemy targets. A well-equipped flight of batriders can wreak havoc and leave a trail of blazing buildings and dead people behind them. When targeting soldiers, batriders concentrate their attacks on lone warriors and small groups, preferring to swoop down on their targets and throw axes rather than engage them on the ground.[4]