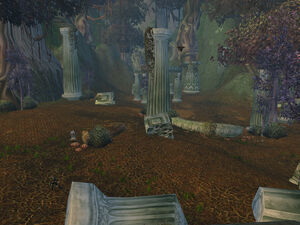 Bathran's Haunt is located in northwestern Ashenvale, north of the Ruins of Ordil'Aran and a ways east of the Zoram Strand. It is the site of an ancient Kaldorei ruin, long since abandoned by the night elves. However, it has recently become populated once again, by agents of the forsaken. These undead creatures skulk among the fallen pillars and broken bits of marble, and the land itself has been tainted by their presence, the grass turning a foul brown and the flowers withering away.

The Forsaken agents, mostly made up of herbalists and their thugs, appear to be using the various local herbs, and their makeshift laboratory for malicious purposes. They are friendly to Horde players.

[Bathran's Hair] - a valuable remedial herb that only grows in this particular spot.

More recently, orcish overseers have been deployed in the haunt to watch the Forsaken. Relations between them are rather shaky.

In the wake of the Shattering, the spirit of Bathran has appeared and will ask Alliance players to burn his corpse in order to put an end to the Horde's work.