Entrance to the Silent Sanctuary 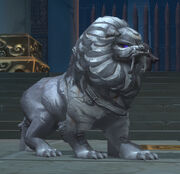 Zhi and the axe 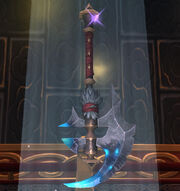 Battle Axe of the Thunder King

Retrieve the Battle Axe of the Thunder King.

The final artifact is the Thunder King's axe.

Lei Shen charged into battle with his spear in one hand, and his axe in the other.

It is said that he could throw his axe with brutal accuracy, and when it hit its target, it made a sound like crashing thunder.

After his death, the axe was placed in a ceremonial chamber to the southwest.

Needless to say, we must not let it fall into the mogu's hands.

Did you find the axe?

Such modesty, <name>. I witnessed what you did to retrieve the axe. Well done.

Head southwest to Mistfall Village. On the upper tier, southwest of the village proper is a door that has been closed up to this point. It's open now... Enter the Silent Sanctuary. Reanimated Quilen guard the way. The quilen have half the health of normal level 90 mobs, but there are a lot of them so don't go too crazy clearing them out.

After clearing the handfuls of quilen, entering the next half of the room starts an event. 20 Jade Constructs, each with 196,000 health, line the walls of the room. Also, there are two healing orbs and one damage orb on a decently-long (20-30s) respawn timer:

Use the buffs judiciously, as though the terracotta warriors start out spawning slowly, the spawn with increasing speed as the event runs on.

Zhi the Harmonious says: Well done, <name>! The Thunder King's axe is ours.

The phase changes again as the gate blocking the axe is opened. Loot the axe then turn in to Zhi. On complete:

Zhi the Harmonious says: You have done well, <name>. We will keep these weapons under close guard, hidden away here in this hall. The mogu shall never see these treasures again.