Ren in the Hall of Tiles

Ren in the Hall of the Serpent 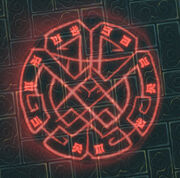 The rune on the ground for Zhao-Jin's Lightning Crash 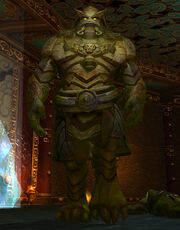 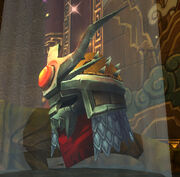 Battle Helm of the Thunder King

Retrieve the Battle Helm of the Thunder King.

The second artifact of power is the Battle Helm of the Thunder King.

Emperor Lei Shen wore the helm into every battle. It became so well-known that his enemies would flee at the mere sight of it.

When the Emperor died, they placed the helm in the very bottom of the Guo-Lai Halls to the west, surrounded by thousands of terracotta soldiers.

Thus, they could look upon their leader and follow him into death.

History claims that Lei Shen feared no enemy except for one. And in the end, it was death that finally defeated him.

While our soldiers fight the mogu on the battlefield, I work to strip away the power of their legends.

In time, Lei Shen shall be no more than the shadow of a memory.

Immediately back to the northwest, and fly in to the Guo-Lai Halls. The center door is open, finally, so head in that direction. Before actually passing the door, stop as soon as Ren Firetongue, standing in the hallway on the right side, starts saying something:

It's a repeat of the similar area in the Valley of Emperors on Kun-Lai Summit.

Stick to the cloud tiles at all times! Also, stop with Ren along the way:

What are you doing here anyway? Come all the way down here to bask in my marvelous company?

Follow him. He will stop at the door at the end of the hallway.

Ren Firetongue says: Now where's that big mogu baddy that came tramping through here a short bit ago?
Ren opens the door and resumes running, entering the Hall of the Serpent.

Keep following him. There will be some Jade Sentinels on the way that do the overhead Jade Smash move, so be sure to be clear of the area of effect before the hammer hits the ground. He'll run down the steps and across the hall to the far side, where Zhao-Jin the Bloodletter can be found, just in front of the helm!

Ren will stop to prepare, putting on his

[Molten Armor], so take advantage of the moment to do the same. When ready to go, step in front of Ren closer to Zhao-Jin:

Zhao prefers casting Lightning Crash to meleeing, so don't interrupt it. Adventurers and Ren will have to work through almost 3 million health (taking Zhao-Jin down to 2.8 million health) to advance the phase:

Zhao-Jin the BLoodletter yells: You are not as weak as I thought, but the helm is still mine...
Zhao-Jin puts on the Ward of the Shao-Tien, making him immune to all damage and starts walking toward the helm when suddenly, Ren casts a frost spell at the helm, freezing it and preventing Zhao-Jin from picking it up!
Zhao-Jin the Bloodletter yells: Aaaarrrghhh! <Class>, when we next meet, I will separate your head from your body.
Zhao-Jin activates the two Jade Guardians on either side of the helm and teleports out.

The Jade Guardians, terracotta warriors each with 1.2 million health and the following abilities:

Both of the guardians will slowly move, but they will be focused on the adventurer and not Ren, so keep moving. Do try to keep them together for the Crushing Stomps, as that ability hits friend and foe alike!

Once they're both dead:

Loot the helm and run back to the Golden Pagoda.