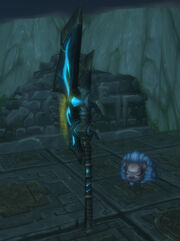 Battle Spear of the Thunder King 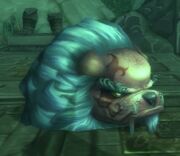 Retrieve the Battle Spear of the Thunder King.

I have received some troubling news, <name>.

The mogu are plotting to steal three artifacts of power from the Vale.

We must retrieve the artifacts immediately and hide them for safekeeping.

The first artifact is the Battle Spear of the Thunder King.

Upon emperor Lei Shen's death, the spear was placed in an ancient shrine to the northwest.

Bring the spear back to me.

It was said that the most powerful of ancient mogu could call the powers of the elements.

The Thunder King himself could channel the forces of lightning onto his spear.

Well done, <name>, although it pains me to lay my eyes upon that wretched spear.

As long as I live, the mogu shall never have possession of it again.

The "ancient shrine to the northwest" is above the Ruins of Guo-Lai and the Guo-Lai Halls on the Ancestral Rise. The rise, just west of the Ruins Rise, has taken on water over the years. The spear itself is underwater in the middle of the pool. Interact with it and suddenly Gasaran awakens! A level 90 quilen, Gasaran has 1,181,000 health and the following abilities:

Finish it off or flee, then head back to the Golden Pagoda.