Battle at the Gates of Orgrimmar

The battle at the Gates of Orgrimmar[1] was the culmination of the Fourth War. The battle was also a conclusion to Sylvanas Windrunner's actions during the War of the Thorns and the War Campaign, as the infamous Warchief prepared to make a final stand against her enemies and former allies.

Preparing to scout and get intelligence.

Vendors moved outside the town.

Outside the Razor Hill entrance.

The burrow transformed into an infirmary.

The inn is full of Alliance soldiers, some of who are drunk and sleeping.

Squads of soldiers and a tank.

As Saurfang's and Anduin's forces rallied together to depose Warchief Windrunner, Anduin and Saurfang had a private meeting in Dustwallow Marsh. As their discussion progressed, gathered their forces to break the cycle and defend Azeroth, with "For Azeroth" as their rallying cry.[2]

To protect Azeroth and depose of Sylvanas, the Horde revolutionaries and Alliance planned to strike at Orgrimmar and to that end set up camp in Razor Hill, with various leaders coming here as well, including Alleria and Vereesa. Sylvanas rettaliated and collapsed the tunnel between Razor Hill and Orgrimmar. As a response, Saurfang turned to Gazlowe and Tinkmaster Overspark breach the canyon.[3] With his forces established within the Dranosh'ar Blockade, Saurfang turned to dealing with Sylvanas's spies and protecting their siege weapons.[4][5] Knowing that Orgrimmar's greatest weakness was its multiple entrances Saurfang's strategy relied on attacking all three entrances at once. To that end, he directed for Genn Greymane's forces to attack Orgrimmar from the Northern Barrens, Lor'themar Theron and Shandris Feathermoon to lead their forces to attack the city from Azshara, and he, Thrall, and Anduin would lead their forces to attack Orgrimmar from Durotar. He further ordered Mayla Highmountain to lead her people to protect Thunder Bluff in case of Sylvanas launching a counterattack.[6]

Alliance Guard (2) says: The betrayal at the Broken Shore? You think she meant for him to die?
Alliance Guard (1) says: I was there, saw it with my own eyes. She wanted all of us to die.

As Varok's and Anduin's forces finally assembled at the Dranosh'ar Blockade and sent their forces to capture the entrance from the Northern Barrens and Azshara, Sylvanas gathered her remaining loyalists and locked the city down. Overlord Geya'rah brought her Mag'har to the Valley of Strength to prepare for combat. Pathfinder's Den was also made unavailable, causing discontent among some adventurers gathered there as well. The Cleft of Shadow was closed too. Jastor Gallywix had Overworked Underlings burn Piles of Misfiled Paperwork and Stacks of Totally Legal Paperwork at the Orgrimmar Embassy. The Gates of Orgrimmar were reinforced with a cadre of dark rangers. Streets of Orgrimmar were filled with various citizens discussing the events, with propaganda against Sylvanas being hung as well.

At the Gates of Orgrimmar

Before the battle could commence, Saurfang, recognizing Sylvanas's loyalists as their brothers and sisters in the Horde and unwilling to spill more Horde blood, challenged Sylvanas to Mak'gora, in spite of Thrall voicing his suspicions that he would die. When Sylvanas questioned why she should accept his challenge, Saurfang merely pointed out that she wanted him to suffer, causing Sylvanas to wordlessly agree. While Sylvanas armed herself, Saurfang was granted an axe by Thrall and Shalamayne by Anduin. Sylvanas initially had the upper hand against Saurfang, however, when she began to mock him about hope, Saurfang got his second wind by declaring that Sylvanas couldn't kill hope. As Saurfang turned the tide against Sylvanas he claimed that she failed to kill hope at Teldrassil, failed in getting the Horde and Alliance to keep killing each other, he further declared that the Horde would endure, that Horde was strong and was able to slash Sylvanas across her eye. This turn caused an enraged Sylvanas to declare that Horde was nothing, that they were all nothing. Sylvanas then killed Saurfang quickly with a blast of unknown magic, and abandoned the Horde altogether. Anduin, Zekhan, and Thrall, picked up Saurfang's body and headed to Orgrimmar.[7]

The funeral of Varok Saurfang.

With Varok's death and Sylvanas gone, the Horde entered Orgrimmar while the Forsaken and other loyalists surrendered. A portion of Orgrimmar's population, the Horde leaders, as well as King Anduin and his retinue attended Saurfang's funeral in front of Grommash Hold in the Valley of Strength. Both Thrall and Anduin had a speech about Varok. When the funeral was done, the Alliance teleported out of Orgrimmar. Horde leaders expressed their opinions on the situation.

Various Forsaken re-pledged their allegiance to the Horde, along with the Bilgewater Cartel goblins and the Mag'har orcs led by Geya'rah who had sided with Sylvanas during the conflict. Those Horde members that maintained and expressed their loyalty were chained and transported by Horde Grunts away. Despite the pledge, several Forsaken secretly remained loyal to Sylvanas. Since Orgrimmar became leaderless, various Horde leaders maintained order in the streets of Orgrimmar and quelled any turmoil.

Auctioneer Ralinza refuses to allow a Former Banshee Loyalist to use the Auction House in the Valley of Strength so Gazlowe steps in.

Rilgiz is distrustful against a Former Banshee Loyalist and refuses to grant them access to the Bank of Orgrimmar in the Valley of Strength. Baine Bloodhoof arrives to offer his wisdom.

The patrons of the Valley of Strength's The Broken Tusk, Zazo and Goma, also have a few words about the current situation as well as about Saurfang's death.

Goma says: Sylvanas broke the rules of mak'gora, didn't she? Does that mean Saurfang...
Zazo says: Who is to say? Everything is in chaos these days.

Zekhan is in front of the Orgrimmar Orphanage telling stories about Saurfang to Horde Orphans.

First Arcanist Thalyssra patrols the Gates of Orgrimmar and enters the Pathfinder's Den when a Former Banshee Loyalist‎ attempts to use a portal, but Stoki Wonderwand stops them.

Forsaken Refugees in the Valley of Strength are saddened by Sylvanas's actions.

Some lament at Sylvaras while others still believe in her.

There are questions to be answered between Forsaken refugees and Orgrimmar Grunts.

A pair of grunts is lamenting their choice of allegiance that caused a rift in the family. They also discuss the Alliance in Durotar.

Orgrimmar Grunt (2) says: So they're good to their word, then? They won't launch an attack against us?
Orgrimmar Grunt (1) says: For now. Give it time. They'll be calling for our blood again before long.

Saurfang was a legendary warrior, but he started out just like you. With only an axe and the drive to grow stronger.
Follow his example. Train hard. Never give up. Accept nothing but victory or death.

Bilgewater goblins in the Orgrimmar Embassy have something to say about their boss.

Revi Ramrod says: You hear about Gallywix? He was burnin' mountains of paperwork while Saurfang was at the gates.
Kall Worthaton says: Of course he was. Can't pin anything on him that way.
Revi Ramrod says: You know... if we could find something he didn't want found...
Kall Worthaton says: Don't be stupid. No way he'd leave any loose ends lyin' around.

A former Banshee loyalist in the Skyway is worried about their fate.

Ya be far from home, blood elf. Go hunt for Nathanos in da Eastern Kingdoms. Kalimdor be headhunter territory.
Nathanos was once one of our own. It is the Farstriders' responsibility to see him brought to justice.
Suit yaself. But remember, he be knowin' ya ways ta track him. He not be hidin' from us so easily.

Nathanos is missing. Fled with his queen and hasn't been seen since.
Is that any surprise? He had even less love for us than she did.
They must be true to their people. They must live and die for them!
I doubt it. Neither of them is capable of love.

Lady Liadrin comes out of Silvermoon's portal in Pathfinder's Den and asks the Silvermoon Magistrix about Orgrimmar's situation, before she begins her patrol with the Blood Knights.

Thrall can be found on the bridge between the Drag and the Valley of Strength. Occasionally (approximately every 30-45 minutes), Geya'rah starts her patrol with Mag'har Grunts near the western zeppelin tower and continues to the bridge with Thrall, passing by him.

Much has changed for the Horde while I was away. But I will do my part to ensure its survival.

The choice you made in the Hall of the Brave... I don't hold it against you. We each did what we thought was right.

Leave it in the past. What matters now is how we reunite the Horde. This is how we start.

Honor, champion. It saved the lives of thousands today. And it has saved my life more than once.

Saurfang and I were both from the Blackrock clan. Blackhand chose us to lead his armies. We committed terrible acts under his command.

I couldn't live with the shame. I went into hiding after the Second War was over. But not Saurfang. He helped other orcs move past their guilt and strive for lost honor.

He was a fearsome warrior. But that isn't what made him a hero. He gave us hope when we needed it most. Back then, and now. That will always be his greatest deed.

I been overseein' da defanse of Orgrimmar for a while now, but I always had Saurfang ta guide me, Now, I gonna be on my own.

Thought I had more time ta learn from him. We always be tinkin' dat, dont we? I got me some big shoes ta fill.

But I be trustin' in everything he taught me. I gonna guard dese gates wit' me life. I gonna make Saurfang proud.

Kul Tirans and the 7th Legion 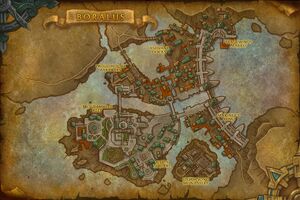 A Tradewinds Dockworker and a Boralus Citizen at Tradewinds Market fear the seas.[77, 21]

Similarly, Night Elf Sentinels are also glad that the war has ended.[70, 37]

are not so keen on forgiving.

The Sentinels are also concerned for Tyrande Whisperwind and the hunt for Sylvanas.

Stormwindians remain somewhat skeptical towards the ending of the war as well as Anduin.

Alliance mages in the Wizard's Sanctum in the Mage Quarter discuss Anduin and Saurfang.

Honor Hold Mage says: My cousin just came back from Durotar. Said that Saurfang challenged Sylvanas to single combat.
Vanguard Battlemage says: How he ever escaped from the Stockades is beyond me. The guards keep that place under close watch.
Kirin Tor Emissary says: I heard a rumor that King Anduin himself released Saurfang from his cell.
Sparkbright says: That's just hearsay. It can't possibly be true.

Stormwind guards in the Trade District

Two guards outside the Trader's Hall discuss the state of Capital City in Lordaeron.

Darnassian Refugees in the Canals are still lamenting.[56, 76]