For lore on the invasion, see invasion of Gilneas.

Regardless of the victor, monsters will rule over the ruins.[1]

Battle for Gilneas is a 10 vs 10 resource race battleground set in the Ruins of Gilneas, for players level 85 and above.

The Battle for Gilneas takes place on the northwestern coast of the Gilnean peninsula. Following the events of Silverpine Forest, Alliance Forces must fight to control and repel Horde invaders from the rebuilding and war tattered nation of Gilneas, while the Horde invades by ship, with the goal to crush the Alliance in the area, and regain a foothold in Gilneas, all former Forsaken footholds in Gilneas having been destroyed.

Isolationism has long shaped the nation of Gilneas, affecting its people inside and out. The enormous Greymane Wall once protected them from a plague of undeath; now that the wall has fallen, the citizens who huddled behind it are forced to confront that particular fear. The rotting Forsaken seethe to spread their contagion throughout the whole region of Lordaeron, claiming it as their own - and they see opportunity in Gilneas' rubble.

Fortunately for the people of Gilneas, their own particular curse transformed them into bestial wolf-human hybrids.

Now, the Horde will support their undead allies' attempt to seize resources from a damaged nation, while the Alliance comes to the aid of a tainted people seeking new lives. Regardless of the victor, monsters will rule over the ruins.[1]

When King Greymane severed ties with the Alliance after the Second War, the kingdom of Gilneas became independent from all other nations and opposing forces. Although the massive Greymane Wall protected Gilneas from outside threats, a virulent worgen curse and civil war crippled the kingdom from within. As the Cataclysm strikes and the Greymane Wall's gates are destroyed, the people of Gilneas must come to terms with their dark curse and learn to persevere through catastrophic earthquakes and an unrelenting Forsaken invasion. The Horde recognizes this land as a strategic location with key resources to fuel the faction's war effort against the Alliance, and Horde forces will not stop their siege until the city and its surrounding territories are under their control. To protect its lands from the Horde, the once-isolated nation of Gilneas must now work with the Alliance.[2]

As the Greymane wall collapses, the inevitable conflict between the Forsaken and Worgen reaches a new climax. The Battle for Gilneas is a 10 vs 10 domination battleground, where each side attempts to control the Mine, Lighthouse, and Waterworks for as long as possible. 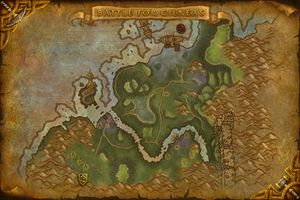 Map of the Battle for Gilneas. 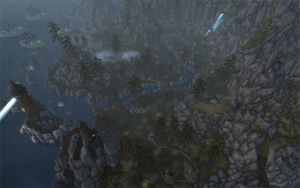 An aerial view of the battleground. 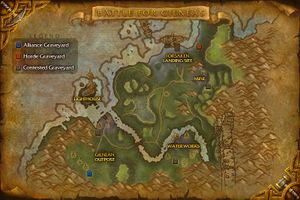 The bases and graveyards of the Battle for Gilneas.

The Battle for Gilneas is a 10 vs. 10 Battleground for level-85 players. Much like they do in Arathi Basin, teams must control strategic capture points on the map to accumulate resources. The first team to gather 2000 resources wins.

Teams will start at opposite ends of the map with default graveyards nearby. Once the match begins, teams will race toward each other to vie for control of three strategic points; each point will allow your team to gain resources and additional graveyards. Adding to the intensity of the battle are many obstacles that block line of sight, as well as chokepoints for fending off enemy advances.

In the center of the map is an area known as the Overlook. Hills on either side of the map create chokepoints, while narrow paths through the hills provide teams with alternate routes. A river dividing the map will also lead opponents toward a single bridge. In some cases, dominating the Overlook might be the key to controlling the capture points.

In the Battle for Gilneas, three distinct resource points are available for the taking by either the Horde or the Alliance: the Mines, the Lighthouse, and the Waterworks. Once any of these points is held by a team, access to nearby graveyards will be granted. In addition, workers from the controlling faction will show up to collect the resources necessary to win the battle.

Chaos will be unleashed upon Azeroth when Deathwing returns, but many steadfast leaders will see the Cataclysm as an opportunity to further the cause of their people... or simply attain more power. The situation in Gilneas is no different. Will the embattled Gilneans be able to defend their land after realigning with the Alliance? Or will the Forsaken, reinforced by Garrosh's Horde, seize this near-forgotten territory as a new stronghold in the Eastern Kingdoms?