This article is about the raid instance. For lore about the battle, see Battle of Mount Hyjal. For other uses, see Hyjal (disambiguation).

Battle for Mount Hyjal, also called "Hyjal Summit" after its subzone, is a 25 player raid instance in the Caverns of Time. Players go back in time to take part in the historic Battle of Mount Hyjal ending the Third War, "assisting" human, Horde, and night elf forces in fighting off the Burning Legion and the Scourge, ultimately weakening Archimonde enough to allow for his final defeat. This roughly duplicates the final mission of Warcraft III. The raid's difficulty is slightly below that of Black Temple, and the first two Tier 6 set tokens can be won there. Defeating enemies in the raid is the only significant way to gain reputation with The Scale of the Sands.

Mount Hyjal does not require attunement. Prior to Patch 2.4 completion of

[70R] The Vials of Eternity was needed in order to enter the instance. The quest is still in the game, the only substantial reward being the (now obsolete) Band of Eternity set of rings. Prior to patch 3.0.2 completion of the quest chain also rewarded the "

[Hand of A'dal]", which now is no longer available. 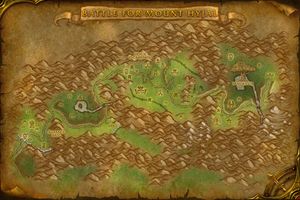 Behind the instance portal is an anteroom which sports another three instance portals (two of them blocked initially), a reagent vendor and the Tier 6 item vendor (who can also repair). The three portals lead to three bases (Alliance, Horde, and night elf) at which all encounters take place. The bases are also connected to each other by a long road within the instance itself. After defeating the two bosses in the human base, the second portal opens up and permits direct access to the Horde camp. After killing two more bosses there, the third gate opens, which leads to the night elves. Wipe recovery is usually possible in place, so the portals are used rather infrequently, save the last one - due to his long aggro range, wipes at Archimonde usually require a corpse run.

The first four bosses are preceded by eight waves of trash mobs each. Each wave spawns once the previous one is defeated, or after a maximum of two minutes; bosses spawn at most three minutes after the final trash wave spawns, and is followed by a longer delay. During trash waves, two counters appear in the UI: one displays the number of remaining mobs in the current wave, and a second for the current wave number. Wiping during any boss or trash wave will require re-clearing all 8 trash waves for that boss.

Enemies can be engaged as soon as they spawn, but fights typically take place close to the entrance inside the friendly bases so that the NPCs can be used in an easy but controllable way. The waves (and bosses) spawn at the enemy camp about 20 seconds away from the friendly base, so drinking and resurrecting is usually possible between waves. At the Horde location, some waves include flying enemies that will attack NPCs from within the base.

The final boss, Archimonde is not preceded by any trash waves. He can be attacked as soon as the raid arrives.

Talking to base leaders

As was common at the time of this raid's release, the events of the raid are controlled by talking to NPCs. The first four boss events are each started by talking to the current base's leader (Jaina Proudmoore or Thrall). Just clicking on the NPC suffices — it's not possible to abort the event after starting the conversation. Raiders completing the instance at its intended level should be careful not to do so until their entire raid is ready.

All trash and bosses can be handled by two or three tanks; no special composition is needed. Due to the number of mobs attacking in many trash waves, good AoE tanking is required. Consequently a paladin tank was often preferred during the Burning Crusade expansion, but this is no longer a great concern due to changes in tanking class balance.

On most trash waves, it's a good idea to set up an AoE kill zone, particularly for ghouls. Some of the incoming mobs can be kited by hunters to be killed by the NPCs, e.g. the Banshees. Melee players can attack the airborn Frost Wyrms by standing within their hit box directly underneath, but gargoyles must either be silenced while casting a gargoyle strike or kited by ranged DPS until they descend to the ground, where they can be reached by melee. Make good use of the NPCs, as they can add significantly to the overall raid DPS.

[Distract] once a boss has spawned can give the raid an indefinite amount of time out of combat to resurrect the dead and eat and drink. Anecdotal evidence suggests that staying at the side of the boss and also placing the distracts at his side decreases the chance for resists.

Most bosses have AoE abilities for which the the raid must spread out. It's good standard practice to put all ranged damage dealers and healers well distributed in a wide circle around the main tank position.

The Battle for Mount Hyjal bosses

The following table shows the composition of each wave of trash mobs. Note that during waves 2 and 4 before Kaz'rogal, the gargoyles spawn towards the back of the Horde camp and must be dragged to the front by ranged DPS.

The Burning Crusade flash site said that sinister agents have infiltrated the timeways and the bronze dragonflight has enlisted heroes to protect history in three key historical events; one of which is the Battle of Mount Hyjal.[1]

During the quest to become attuned to the Caverns of Time, Custodians of Time mention that the Battle of Mount Hyjal is a timeway that is being deeply disrupted by the Infinite dragonflight, who are working tirelessly to keep it a secret from the Bronze dragons.[2] This interference is alluded to later during the Band of Eternity quests where adventurers are charged with protecting history.[3][4] However, there is not a single Infinite dragonflight member in the instance; unlike the other three Caverns of Time instances.

It was later clarified by Blizzard that the instance takes place in a "time pocket" unconnected to our timeline's history.

It's a "time pocket" if you will. There's no intended link to the Infinite Dragonflight or their dastardly deeds of altered timeways, and you're not literally interacting with history. It's simply a way for players to experience some of the larger moments in Warcraft history, and admittedly the Mount Hyjal instance isn't really linked to the world for any rhyme or reason. The timeway presented itself, it's an amazing opportunity to be there and experience such a major event, and Archimonde drops phat purples.

The Caverns of Time are a strange and complex place, and I don't suspect we will ever be able to fully understand the complex goings on inside them.