The battle for Thunder Bluff was a civil war between the tauren. 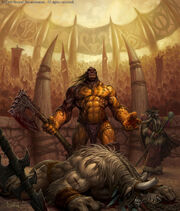 After Magatha Grimtotem spent years trying to find an opportunity to get rid of Cairne Bloodhoof, one such opportunity presented itself in the young orc Garrosh Hellscream. After returning from Northrend, Magatha approached Garrosh as he was standing next to Mannoroth's skull and told him that his father was exactly what the Horde needed, when it needed it. Garrosh found it funny that she was talking about what the Horde needed when they didn't officially join it; as an excuse, she replied that maybe there was no sufficient reason to join the Horde. After praising him a little about his accomplishments, she left him to wonder, personally knowing that all was going according to plan.

With Cairne already unhappy with Thrall choosing Garrosh as his temporary replacement if wasn't long before the chieftain decided to do something about it, Cairne became fully enraged when his old friend Hamuul Runetotem sent an owl to Cairne, claiming that, in Ashenvale — the place where he'd planned a meeting to calm the night elves about the Sentinel's tragedy — nine druids (some night elves, some tauren) were murdered in Ashenvale, with Hamuul likely to suffer the same fate if he was not rescued. Hamuul also wrote that a couple of orcs wearing the Horde tabard were the aggressors, although, unbeknownst to Hamuul, these orcs were agents of the Twilight's Hammer.

After arriving in Orgrimmar, Cairne rushed into Grommash Hold, where he proceeded to have a long and insulting argument with Garrosh, culminating in Cairne challenging Garrosh to mak'gora for the next morning. When the duel arrived, Garrosh chose Magatha as his shaman due to her previous words, and instead of blessing Gorehowl as asked, she poisoned it. While Cairne was the one with the upper hand and would have won, Magatha's trick blinded Cairne and led him to his death. His dying thought was: And so, I, who have lived my whole life with honor, die betrayed.

Start of the conflict

With Cairne dead, Magatha knew that the only one standing in her way was Baine. Knowing that the tauren would conduct a ritual funeral for Cairne including carrying his body from Orgrimmar to Thunder Bluff so that everyone could pay their respects before the body's cremation, Magatha took the opportunity by sending Cor Grimtotem and Gorm Grimtotem to Thunder Bluff to begin their attack and for Magatha not to arouse suspensions. The Grimtotem then managed to capture the entirety of Thunder Bluff while the tauren there slept, killing the strongest tauren and defeating anyone who tried to rise against them.

Meanwhile, Jevan was leading the attack on Bloodhoof Village. Before attacking, he ordered his second in command, Tarakor, to wait, confusing Tarakor greatly; in reality, Jevan did this to give himself time to warn Baine about all that had happened. At first, Baine didn't believe him until he took out a partial containing the remained of the Bloodhoof Runespear. With two dozen Grimtotems rushing on Bloodhoof Village and taking it, they didn't realized of Jevan's betrayal until they didn't find Baine in the Village. Tarakor realized that they passed through Stonebull Lake and ordered the kodo riding tauren to go trough it. However, the kod's didn't want cooperate and the tauren were forced to swim, leading most of them to sink under the lake because of their heavy armor. Baine and Jevan managed to escape to Camp Taurajo, leaving Thunder Bluff, Bloodhoof Village, Sun Rock Retreat, and Camp Mojache in Grimtotem hands.

Upon arriving, they were greeted by Jorn Skyseer. They went to the back of a lodge to discuss all that had happened, with those present including four braves from Thunder Bluff, the recent recovered Hamuul Runetotem, and their now ally Jevan, better known as Stormsong. Jorn revealed that Sun Rock Retreat was repelled. Seeing their options, Baine said that their enemies are more trustworthy then their friends and decided to travel to Theramore. Jaina Proudmoore welcomed Baine and began to discuss. At the same time, Anduin Wrynn used Jaina's hearthstone to escape from Ironforge and popped up in her tower where he found the tauren. When Jaina calmed them down, they continued their discussion. On one meeting night, Anduin gave Baine Fearbreaker to assist him in his war against Magatha.

Denial from the Warchief

When Magatha proclaimed herself Chieftain of Thunder Bluff, she knew that Baine would try to take it back. She sent a message to Orgrimmar, hoping that Garrosh would send troops to repay her loyalty to him. Very soon a runner returned with a message from Orgrimmar. Feeling that Garrosh refused to send aid, the enraged Magatha killed the courier.

Jevan traveled to Ratchet where Gazlowe had agreed to aid the tauren against the Grimtotem for a price. Gazlowe read their request and was surprised by the number of bombs that were required. Jevan gave double the payment for the job due to this, but Gazlow refused, claiming that he supported Baine's cause. Before leaving, Gazlowe told Jevan that he'd always liked his father.

Before the battle began, Baine learned that Camp Mojache hadn't fallen but the fighting was ongoing, he didn't ask for help from Garrosh for he still didn't know whose side he was on. Magatha recalled her warriors from Bloodhoof Village and Camp Majache to defend Thunder Bluff. Under Jevan thunder cloud, three Zeppelins approached the city. When the ropes were lowered, orcs, trolls and tauren rushed in. Magatha began to fight using her totems, fired lightning Bolts from her fingers to take down the Zeppelins. She hit one and it caught on fire. As it went down it's pilot crashed it into the flight tower, to kill the wyverns so they were not to be used by the Grimtotem. While this was bad for Magatha, another matter caught her attestation. High Rise was being bombarded heavily with another zeppelin on top of it. The Rogues who landed began to cut the ropes to the rises to give Magatha a taste of her own medicine. The troll mercenaries defused the lifts before the Grimtotem blew them. The Grimtotem hunters and druids climbed on the remaining wyverns, but they were shot down by arrows and guns. The druids survived by taking flight form, but hunters met a cruel fate. Magatha was on the run, she order the detonation of the lifts and tried to get to the Pools of Vision but bridge leading to Spirit Rise was cut. She looked back to see that one of the lifts was destroyed, but the second one didn't. The lift carried Baine to the city and he rushed to Magatha. He was so fast that Rahauro couldn't stop him. Magatha quickly reached for her totems but Baine was already upon her. He swung Fearbreaker and hit her on the side, send her flying. She was in pain and too much in pain to react, Baine was already crouching over her. He ordered her to yield and Magatha agree when she realized she was exposed.

After the battle, Baine ordered that the surviving Grimtotems are be treated for their wounds. When all the Grimtotem were rounded up Baine spoke of how his father was generous enough to let them stay in Thunder Bluff and they repaid him with his blood. He spoke to Magatha about how she wanted power and what it takes to be a leader, she feared his words. Then Baine grabbed her totem pouch and destroyed it before her. Baine exiled her to Stonetalon Mountains and gave the rest of her tribe a choice: become permanent members of the Horde with him as their chieftain or follow Magatha in exile. The first to join were Tarakor and his family. Afterword, many more Grimtotem began to rise. Those who remained loyal to Magatha were escorted to Stonetalon by two dozen Bluffwatchers. Baine swore that even if An'she was guiding him, he would not stay his hand if they meet again.

After the battle, Baine traveled to Thousand Needles to meet up with Garrosh, along with Jevan and Hamuul. After much talk of what had happen, Baine renewed his loyalty for the Horde.

After all the commotion, Baine returns to Mulgore to give his father a proper farewell. Baine burned his father's corpse and his spirit is released, then the elders accept him as one of their own.

Adventurers can witness the burial during the Children's Week.[1]