For the mission from Warcraft II, see The Battle at Crestfall (WC2 Human).

The Battle of Crestfall was a major naval engagement that took place between forces of the Alliance of Lordaeron and those of the Horde as part of the Second War, near the island of Crestfall in the Eastern Kingdoms.

Occurring around seven years after the original opening of the Dark Portal, the Battle of Crestfall served as one of the largest naval conflicts of the war. The Horde armada found itself overtaken, outmaneuvered, and ultimately blown to pieces by the fleet under Admiral Daelin Proudmoore. The orcs' once-decisive red dragons were rendered much less effective during the course of the battle by the presence of Alliance gryphon riders.

Although the Horde had been in full retreat since the failed Siege of Capital City, the battle was critical in firmly reestablishing Alliance maritime supremacy over Azeroth's seas. 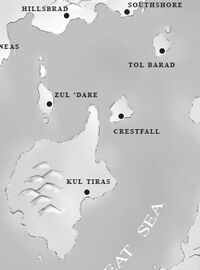 Having raged for over a year, the brutal Second War between the Alliance of Lordaeron and the Horde finally began to move toward a conclusion as the tide shifted in favor of the humans. The Horde's failure to seize Lordaeron's Capital City set into motion a retreat back the orcs' southern holdings. Warchief Orgrim Doomhammer halted his armies at Blackrock Mountain in the Burning Steppes and began to gather all available forces in preparation for a final stand.

At the same time, the Black Tooth Grin clan remained at sea, continuing their own voyage back to Horde territory. They had been tasked with pursuing and killing the orc warlock Gul'dan, whose abandonment of the Horde had led to its failure in Lordaeron. Under Maim and Dal'rend Blackhand, the clan succeeded in this endeavor. They now received word of Doomhammer's orders to gather in the Burning Steppes, and set a course for Horde-occupied Stormwind City.[2]

Even as these events unfolded, the Alliance navy under Admiral Daelin Proudmoore was in hot pursuit of this orc fleet. Proudmoore's seasoned maritime fleet was able to easily outmaneuver the less sea experienced orc navy at Zul'Dare before the Battle of Hillsbrad Foothills and blew many of their ships to pieces. However, following the orcs from behind were enslaved red dragons that had bathed several of the Alliance vessels in fire. Though the dragons were few in number, Proudmoore had no means to combat them at the time and was forced to call a retreat.[3] He and his forces were now eager for retribution. They eventually overtook the clumsier Horde ships near the island of Crestfall, close to Kul Tiras itself.

Admiral Proudmoore's ships were able to easily outflank the lumbering and crude orc vessels, wracking them with cannon fire and inflicting casualties. The Battle of Crestfall thus began largely similar to the Battle of Zul'Dare earlier in the war, in which the Horde was able to secure victory using their potent red dragon riders. The Horde ships here, too, were guarded by a group of these winged beings. This time, however, the Alliance fleet was accompanied by a force of Wildhammer dwarf gryphon riders led by Kurdran Wildhammer.

During the battles across the high elven kingdom of Quel'Thalas earlier in the Second War, these gryphon riders had found themselves at a severe disadvantage when faced with the terrifying might of the Horde's dragons. Though they were defeated at the time, the dwarves had since learned much from these experiences. Employing new tactics, they now used their mobility against their larger adversaries.[2]

As the dragon riders bore down on the human fleet and prepared to burn it to cinders, the dwarves struck. Taking advantage of their superior speed, they attacked the dragons in a flurry of movement, drawing their attention away from the ships below. Their lightening-infused stormhammers were wielded with deadly efficiency, and were pitted against the formidable flames of their scaled enemies.

Apart from the carnage taking place above, the two fleets continued to battle among the waves. Alone, however, the Horde stood little chance, and continued to suffer disastrous losses at the hands of the Alliance navy. The sea itself was painted red with the blood of the countless individuals drowning or being killed outright in the struggle. Derek Proudmoore, the son of the Alliance commander, was slain when his ship was incinerated by a gout of dragonfire.

Eventually, the majority of the Horde fleet was left in ruins. Only a handful of vessels escaped being sunk, Dal'rend and Maim Blackhand's among them. Above, the dwarves' fearless efforts were enough to ultimately drive the dragon riders to flight, and they subsequently scattered in all directions.

The Battle of Crestfall ended as a decisive victory for the Alliance, particularly its navy that had not been able to counter the red dragons up to this point. The few Horde survivors managed to make their way back to Stormwind City and on to Blackrock Mountain, though not quickly enough to take part in the decisive battle there.[1]

Despite the victory achieved, the Alliance navy also sustained heavy losses, primarily at the hands of the dragons (though they could not devote their full attention to the fleet). The death of his son, Derek, weighed extremely heavily upon the humans' commander, Daelin Proudmoore. The event would have a long-lived effect on the admiral, who would subsequently develop a deep hatred of the orcish race.[2]