This article is about the lore of the battle. For the page on the raid instance itself, see Battle of Dazar'alor (instance). 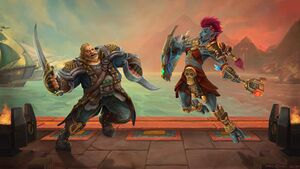 The Battle of Dazar'alor[1] was an attack by the Alliance on the capital city of the Zandalari, Zuldazar.

After receiving reports of the Alliance invading Nazmir and conquering the Blood Gate, the Zandalari and the Horde decided to combine their forces and drive them out with a counteroffensive.[2] Having diverted both the Zandalari and Horde forces away from the capital into the swamps of Nazmir, the Alliance unleashed its forces upon the royal pyramid of Dazar'alor.

Jaina Proudmoore and her ship spearheaded the Alliance navy's assault on Dazar'alor. Once they were within range, the Alliance planned to detonate the hidden explosives they planted on the Golden Fleet's ships. The Golden Fleet, however, began harrying the Alliance navy with their ballistaes and one of them collapsed the deck by Gelbin Mekkatorque's position just as he was about to detonate the explosives, causing him and his remote detonator machine to fall through to the deck below. Unsure if he was dead or not, Jaina began using her magic to shield her ship from missiles; just long enough for Mekkatorque to pull himself from the debris, get the detonator upright and blow up the entire Golden Fleet defending the Port of Zandalar. With the Golden Fleet in ruins, the Alliance navy invaded Dazar'alor with little resistance.

Despite the Horde and the Zandalari's combined defenses, the Alliance breached Dazar'alor and faced Rastakhan. Rastakhan refused the Alliance's offer of surrender and declared that the Zandalari would endure long after the Alliance had crumbled to dust.[4] Determined to protect his empire and people, Rastakhan fought against the Alliance forces until he was mortally wounded, now regretting his pact with Bwonsamdi and how he had cursed his daughter through it as well.

After the death of King Rastakhan, the Alliance starts to retreat, with the Horde following them closely. Gelbin can be seen dueling Jastor Gallywix and ends up winning right before the Horde adventurers arrive. While fighting the adventurers Gelbin ends up being severely wounded and escapes using an escape pod.

The Horde continues forward and destroys the Stormwall Blockade at the Port of Zandalar which was buying time for the retreating Alliance, when Captain Zadari conveniently arrives with a Zandalari battleship so the Horde can continue following the Alliance even at sea. Somewhere on the Great Sea the Horde caught up to Jaina who had stayed behind with a handful of Kul Tiran vessels which ended with a naval battle. Jaina boarded the Zandalari vessel and fought the Horde while her ships attacked the vessel simultaneously, although the Horde held on and shot down multiple Kul Tiran destroyers. After a bit of fighting, Jaina froze the sea, locking all the ships in place while bringing the fighting upon the waters where the Horde badly wounded her, forcing her to escape using a spell.

Jaina would spend the journey back to Boralus on a stretcher among the injured, laid out on deck of the ship carrying the other leaders while being treated by priests. Gelbin's escape pod was tended to by his assistant Elgin Clickspring and another gnomish engineer, while Kelsey Steelspark kept guard. However the escape pod placed him in suspended animation, and neither Jaina nor Stormwind's priests know what to do about it,[5] while Halford Wyrmbane and Nathanos Blightcaller refer to him as being dead.[6]