From Wowpedia
(Redirected from Battle of Dazar'alor (instance))
Jump to: navigation, search

For the lore of the raid, see Battle of Dazar'alor (battle). 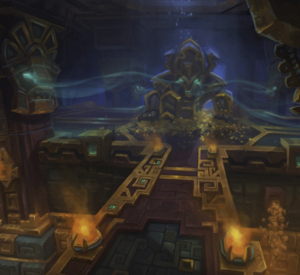 Art from the Tides of Vengeance reveal livestream

Battle of Dazar'alor,[1][2] (also referred to as Siege of Zuldazar,[3] Battle of Zuldazar[4] and Assault on Zuldazar)[5] is a raid in Battle for Azeroth, introduced in Patch 8.1.0: Tides of Vengeance. The Alliance assaults Dazar'alor, while the Horde defends it. There are faction specific raid entrances located in Zanchul and Boralus Harbor.

Alliance start at the docks and climb the pyramid, eventually fighting King Rastakhan. The Horde will defend the city, starting outside on the far north of the pyramid. They fight towards Rastakhan, which will be the middle of the raid for them. They then fight Alliance forces down towards harbor, ending with Alliance commanders and Lady Jaina Proudmoore on the high seas. During the raid you speak to an NPC to play from the other faction's perspective in the middle or final act.

Which race of the opposite faction the player becomes in the flashback is the same as in Mercenary Mode.[6]

For ages untold, Dazar'alor has stood at the center of the great and powerful Zandalari empire. Its guards have thwarted numerous attempts on King Rastakhan's life, and it has endured trials both ancient and new. But as war reaches the shores of Zuldazar, the Alliance embarks on a daring gambit to besiege the golden pyramid and sever the Zandalari's bond to the Horde.[7]

The first three bosses are exclusive to each faction. Three bosses are experienced by both factions through flashbacks where they play as members of the opposite faction, with racials associated to their new form. 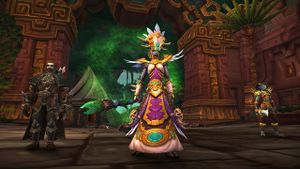 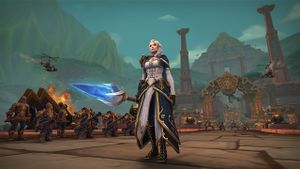 Alliance begin with a naval strike on the docks of Dazar’alor, and the Horde begin the raid by defending against an invasion in the northern jungle of Zuldazar. 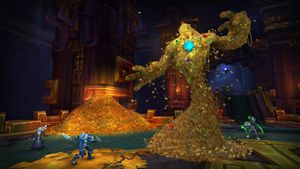 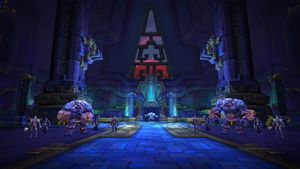 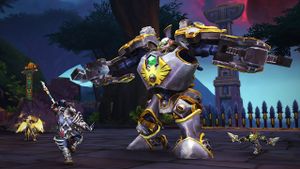 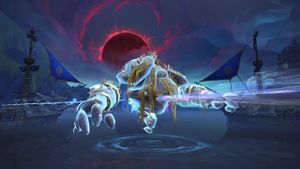 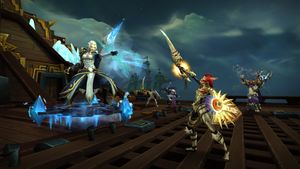 Start of the Jaina encounter.

Normal difficulty or above