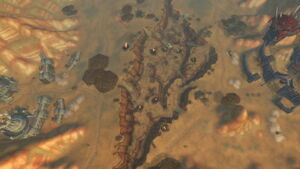 The Battlescar as seen from above.

The Battlescar is a battlefield in Southern Barrens, where the nation of Theramore of the Alliance and the Horde fight against each other for the land. The Alliance has settled a stronghold at the eastern side of the battlefield, called Fort Triumph, while the western part is controlled by the Horde, which founded Desolation Hold on top of what was the Field of Giants.

During the Fourth War, Horde forces were sent to salvage the area.[1]