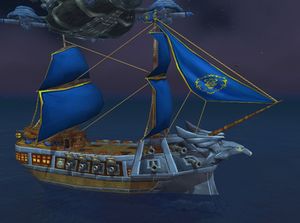 The Valor's Edge, a human battleship.

Battleships are large armored warships equipped with heavy cannons. Several of the races of Azeroth and Draenor have similar classes of warships, but not always sharing the same designation.

During The Frozen Throne campaigns several shipyards sold boats according to the buyer's faction, including battleships. While sharing the same stats, the orcish battleship was actually identified as a juggernaught.

The commanders of Lunarfall and Frostwall can also build battleships at their garrison shipyard. They are good against destroyers and weak against carriers.

The Alliance relied upon its great battleships to control the seas. These hulking behemoths possessed armor and weaponry far greater than that of any other Alliance vessel. The combination of devastating weaponry and substantial armor that they brandished more than outweighed their somewhat slow speeds in waterborne combat.[1]

Modern human battleships were reintroduced in Mists of Pandaria They possess a large metal ram in addition to frontal cannons. Chris Metzen seemed to call them battlecruisers in an interview.[2]

These battleships are based on the pirate[3] and wrecked[4] frigate designs.

The Sister Mercy is a ship of the same basic design as the Forsaken battleship, making it another type of human battleship.

Kul Tiran battleships are noticeably much larger than other battleships. They seem to be based more on real life "first rate" ships of the line, given its large size, multiple gun decks, and number of cannons, giving them superior firepower to any other Alliance sea vessel. They seem to make up the entirety of the Kul Tiran fleet.

Scourge battleships appeared during the Third War. After their liberation, Forsaken battleships (previously referred to as destroyers)[5] are now Forsaken warships in service to the Horde that were first seen around the Howling Fjord.

The Forsaken do not have a harbor or any dry docks. The Forsaken navy is composed of ships dredged up from the bottom of the ocean. Most of them were once among Lordaeron's fleets.[6] Despite this, Forsaken battleships can be built at the Frostwall Shipyard. The Forsaken battleships have been equipped with Forsaken catapults, providing their ships with projectile weapons and blight anti-air. According to Sylvanas Windrunner, the Bilgewater Cartel have modified the catapults to be faster and more powerful.[7]

Night elven and blood elven battleships appeared during the Third War. They were identical to one another.