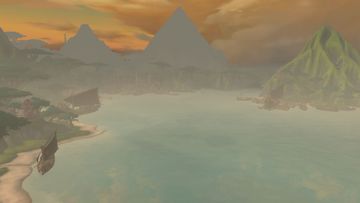 The Bay of Kings

The Bay of Kings is a large bay off the southern coast of Zuldazar on the South Seas that serves as a natural harbor for the Zandalari capital Dazar'alor. The bay has historically been the home of Zandalar's legendary navy in the form of the Golden Fleet, and several important ports occupy the vicinity, such as Warport Rastari. The Bay of Kings is also home to two major islands, Tusk Isle and the Isle of Fangs, which are both used as naval bases and defensive fixtures.

The Bay of Kings was formed during the Great Sundering along with Zandalar itself. Since then, it has served as a launching point for various Zandalari fleets and campaigns, such as Prophet Zul's invasion of Pandaria after its rediscovery.

During the war in Zandalar, much of the Golden Fleet was moored across the Bay of Kings, particularly at Tusk Isle and the Isle of Fangs. An eventual mutiny launched by followers of Zul would take control of most of the fleet, as Kao-Tien mogu forces also moved in to occupy much of the bay. At the height of the coup, only the Port of Zandalar itself remained uncaptured. Zandalari loyalists and Horde agents would ultimately succeed in crushing this threat and reclaiming the fleet.[1]

Alliance covert operations based from Xibala would result in most of the Golden Fleet being sabotaged with explosives in preparation for an impending assault on Dazar'alor itself.[2]