Bazwix is a goblin quest giver who appears and begins following the player around when they enter Sabermaw in Nagrand, asking them to help retrieve his "treasure", which got stolen by the saberon when they attacked the trade wagon he was on (the wreckage of which is now lying near the road outside Sabermaw).[1] He only appears if the player enters Sabermaw after they've accepted

After the player finds Bazwix's prized possession—which turns out to be a pair of calendars with pictures of scantily glad goblin women—he thanks his helper before running off and disappearing, stating that he's "got to do...things and...stuff".[1] 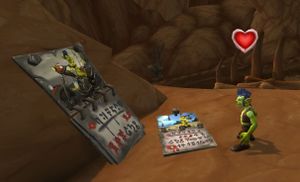 Bazwix and his beloved treasure.

I know how dangerous this place is, but I ain't leaving until I get back what's mine!

When Bazwix first begins accompanying the player, he'll intermittently say the following lines. He stops after the player accepts

Hey! Hey! Wait up!
Are you here to fight the saberon? I need your help!
Please! You've gotta help me out!
What do you want? Money? Power? I'll do anything! Just help me out!
Don't worry[sic] I can take care of myself, but I need your help getting my stuff back!
Take your time, I'll just be right here...waiting...next to you...forever.
You aren't going to leave me hanging here...right?
So much rests on your shoulders! You can't imagine the consequences!

Killing a mob while accompanied by Bazwix can cause him to say one of the following: