Beastlord Darmac is one of the bosses in the Blackrock Foundry, and the first boss in the Iron Assembly wing.

As a young orc, Darmac quickly rose through the ranks of the Thunderlord as a gifted trainer of beasts. Where others only saw animal instincts, he recognized intellect and drew forth untapped potential from brain and muscle and bone. When the Iron Horde demanded his service, Darmac saw no greater honor than to outfit and train the most savage beasts Draenor has to offer.

Beastlord Darmac begins the encounter fighting on foot amongst some of the fiercest beasts that the Iron Horde has tamed. Upon reaching 85% health, Beastlord Darmac leaps onto the back of the nearest Prime Beast to continue the fight. When that Beast is killed, Darmac absorbs a piece of its essence, gaining new abilities. With each additional 20% health lost, Darmac will seek out a new Beast to ride. In Mythic difficulty, Beastlord Darmac dismounts Cruelfang, Dreadwing, and Ironcrusher when they reach 40% health.

Darmac begins the fight on foot.

Stage Two: Back of the Beast

Darmac leaps onto the back of the nearest Prime Beast.

Aggro
Come! Your meat and bones will feed my animals!

Cruelfang's Swiftness
Rage unending... Face the fury of the wolf!

Mounting Ironcrusher
Grant me your strength!

Ironcrusher's Rage
No! I will wield your strength...

Mounting Dreadwing
Let us crush them!

Mounting Faultline (Mythic Only)
I will NOT die here! Faultline, come aid your master!

Faultline's Determination (Mythic Only)
Faultline! I will avenge you! Yes... There. Will. Be. BLOOD!

Rend and Tear
Bleed for me!

Superheated Shrapnel
I will roast your flesh! 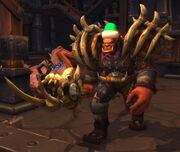