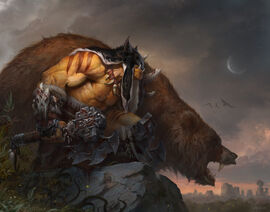 A beastmaster, also known as beast master, is a warrior hero or wilderness warrior who is able to call forth the creatures of the forest to serve him. These lone wandering forest dwellers come from all backgrounds and cultures, seeking the essence of combat through the mimicry of wild beasts.[1]

Among the most gifted hunters, there are those who have from birth felt a profound bond with the creatures of the wild. These beast masters are drawn to the perilous primal world, invigorated by its dangerous and untamed nature. Primitive landscape becomes home. Ferocious predator becomes kin. Whether in the thrill of the hunt or the heat of battle, beast masters call forth a litany of vicious animals to overwhelm prey and gnaw at their enemies' will.[2]

A good portion of the Mok'Nathal are beastmasters; because of their ancestry, they are seen as outcasts among orcish and ogre factions, and aside from other Mok'Nathal, are only accepted by a few sympathizers. They find comfort in the friendly beasts of the wild and the isolation from the hostility of civilization in the wilds.

There are also human, Zandalari, jungle troll, worgen, tauren, frost vrykul and mogu beastmasters. Many of the Thunderlords were also beastmasters.

A number of orcish beastmasters of the True Horde died when they attempted to trap Thok the Bloodthirsty.[3] 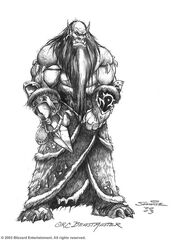 Beast masters are noble savages, wandering the woods and communing with nature. The beastmaster is more at home with wild animals than sapient beings, able to call upon the forces of nature to help him. Most beastmasters are mercenaries, but a few work solely for the Horde.[4] They are usually from the Horde or night elves.[5]

The beastmaster is a wilderness warrior who has developed an uncanny rapport with animals. Though truly fearsome in battle, the beastmaster can be quite gentle when dealing with creatures of the wild. A beastmaster typically travels with one or more animal companions such as hawks and bears who show incredible loyalty to their humanoid friend. Though a beastmaster prefers to spend his time in the wild with his animal companions, he is not averse to venturing into civilized lands when the need arises. As long as animals may be found where he travels, the beastmaster is at home.[6][7]

A beastmaster can use body language, vocalizations, and demeanor to improve the attitude of an animal (such as a bear or a giant lizard). The beastmaster may comprehend and communicate with animals and magical beasts.

The beastmaster can grow claws and fangs or horns. In time they grow even longer and wicked than before.[8]

According to Brann Bronzebeard, Rexxar is not only a beastmaster, he is an epic beastmaster.[9]

Note: Many of these names come from random beastmasters in The Frozen Throne. However, the names are referenced in Horde Player's Guide.[10]