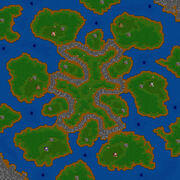 Beetle Island is an official Warcraft II: Battle.net Edition custom map created by Blizzard and released on the Warcraft II Strategy website for download on October 29, 1999.

In a remote kingdom, the battle between the Orcs and Humans took place atop a huge creature. Created from the eldritch energies unleashed by Medivh during the birth of the Dark Portal, a giant, carnivorous beetle roamed the lands of Azeroth. Destroying ancient forests to satisfy its voracious appetite and crushing all that stood in its path, the beetle became a menace to both the noble armies of the seven kingdoms and the savage green-skinned invaders. In an awesome display of sorcery, the likes of which have not been seen to this day, the great creature was polymorphed by the mages of the Violet Citadel just as the Orcish Death Knights unleashed a massive barrage of Decay spells. The result was the death and transformation of the beast into what is now known as Beetle Island.

Once the greater threat was destroyed, the two armies quickly set upon each other again, of course...[1]