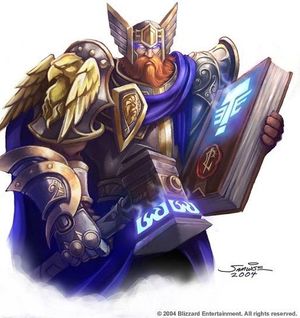 The purpose of this guide is to give advice and guidelines to paladins tanking low level instances and take a bit of the guess work out of your first few tanking trips. To start, here are a few things to keep in mind:

Bear druids use thorns, the thought behind it is the same. The danger for Paladins is if the monster starts hitting someone other than them.

At level 15 you can now apply Glyphs. Choose

[Glyph of Judgement] for your major Glyph and whatever Minor Glyph you feel like.

[Glyph of Blessing of Might] will probably be the most useful for you at this point.
At level 30 you gain another major Glyph.

[Glyph of Seal of Vengeance],

[Glyph of Hammer of the Righteous](the last major glyph depends on your play style for the most part)). Other minor glyphs are up to your playing style.

Your Talents points should look like this.
Tanking prior to level 16 is difficult. You receive

[Righteous Fury] at level 16, which increases the threat generated by your holy spells by 80 percent, without that, generating enough threat, especially on multiple mobs will be difficult and is just not fun or advised.

Your Talents points should look like this.
Paladins now get several of their signature spells.

Your Talents points should look like this.
You've gotten a few more spells, but you should be getting the hang of things by now as long as you have a firm grasp on the basics.

You can't wear Plate until level 40, so only equip Mail items until then. Items with the suffix "of the Bear", "of the Champion", or "of the Soldier" are preferable. Champion is the most preferable. Random dungeons are the fastest way to get the equipment you need because of that lovely reward satchel.

[Cavedweller Bracers] are solid items from the first instance you’ll likely run, Ragefire Chasm . The sword, while not providing any stats, is a solid one-hander for this point in terms of damage. The bracers provide useful stats and better armor than you’ll likely find on any wrist piece for awhile.

Wailing Caverns provides several useful items, most notably a good shield. Two of note are worth getting, either the

[Seedcloud Buckler]. The buckler is preferred, as it provides more armor, block value and some intellect to bolster your mana pool. Other than that, a few blue mail pieces are available, of note being the

Deadmines is mainly useful for acquiring a better weapon. My pick is

Beyond these initial instances, pay mind to items offering Stamina (for health) and Strength (for hitting hard) first. Agility is good for Crit and Dodge and Intellect will provide you with a larger mana pool. Spirit just plain sucks, so ignore it if it's on an item. It's not helping you any so does not contribute to the value of a piece of armor.