For the dire troll rare mob in Blackrock Mountain, see The Behemoth. 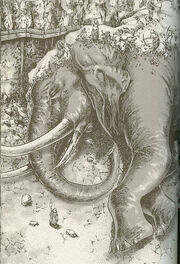 Behemoths (aka ancient behemoths) were a species of giant elephant that once lived in the Eastern Kingdoms, but are likely now extinct. Many corpses of the behemoths could be found frozen within the Alterac Mountains. The evil Forsaken Baron Valimar Mordis tricked many dwarves into mining the mountains to free the remains of behemoths and dragons found within. He planned to resurrect them using an Orb of Ner'zhul, and then use them to take revenge against the Scourge as well as the living.[1]