Behemothon, King of the Colossi

From Wowpedia
(Redirected from Behemothon)
Jump to: navigation, search

Behemothon, King of the Colossi can be found in Shadowmoon Valley.[50, 62] 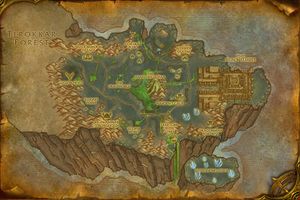 Little is known about King Behemothon other than that he was negotiating an alliance with Illidan Stormrage. After the player disguises himself as an Illidari blood elf and slays a number of colossi in Shadowmoon Valley, Behemothon loudly declares that he will never ally himself with Illidan.

Brashly you have attacked my children, Illidan! The pact is broken. Giant will never side with elf! NEVER!
Behemothon, King of the Colossi roars in defiance.

Using a hunter's track giants ability, he is found at 50,62, presumably below ground. He can't be targeted perhaps because he is underground but has a model which resembles the other colossi except with a slight green tint and green crystals protruding from his back.