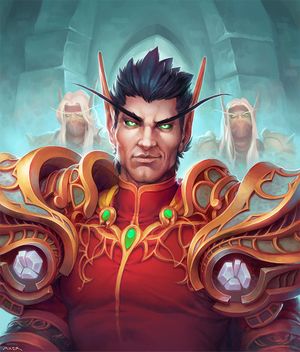 Belloc Brightblade is a blood elf archaeologist and a member of the Reliquary. He is located in Orgrimmar as an Archaeology trainer and a part of delegation from Silvermoon City,[1] standing in Grommash Hold.

Belloc Brightblade is seen leading a large group of Reliquary from Sparkrocket Outpost in Krasarang Wilds during the Domination Point storyline. He sends some members of the Reliquary into an ancient mogu mine. Brightblade tasks adventurers with checking up on the operations.

Belloc Brightblade ventures through the Dark Portal into alternate Draenor with the Horde. He is in search of an artifact on Ashran and is at odds with Harrison Jones. Brightblade can also be killed as a bonus objective for Alliance adventurers.

Those of the Explorers' League and The Reliquary are very much alike: Archaeology is our religion, yet we have both fallen from the pure faith.

Our methods have not differed as much as they pretend. We are but a shadowy reflection of them.

It would take only a nudge to make them like us. To push them out of the light...

Of course the Explorer's League stumbled into a foolish situation and are in over their heads.

And of COURSE we are going to take advantage of it.

Belloc appears as one of the bosses that can be encountered in the Tombs of Terror adventure in the Saviors of Uldum expansion for Hearthstone.