Belysra Starbreeze is a night elf priestess of the Moon who fought during the War of the Satyr. Along with the druid Ralaar, she created the Scythe of Elune, a powerful artifact containing the power of the moon goddess Elune and of the wolf Ancient Goldrinn.

In an attempt to help Ralaar tame the effects of the Pack form, they created the first worgen. They would prove extremely successful in fighting off the satyr, destroying their outposts and killing their leaders. Ralaar, however, would then turn them against Malfurion Stormrage and the night elves, forcing the archdruid to seal them within the Emerald Dream. 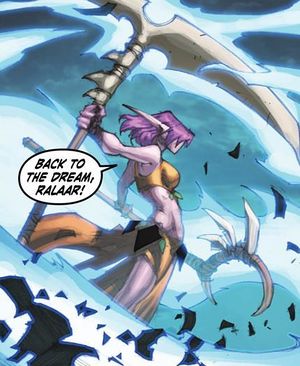 After the War of the Ancients, the night elves were still fighting off the remains of the Burning Legion in what would later be known as the War of the Satyr. Arvell, her mate, was a druid who died in one of the attacks of the Legion remnants. It is implied that he would have survived if he had taken the Pack Form, but because of a promise to Malfurion Stormrage to never take that form again, he did not. This caused her to turn against Malfurion and help Arvell's friend, Ralaar Fangfire, create the Scythe of Elune. After the newly created worgen went feral and attacked both satyr and night elf alike, Belysra realized her mistake and delivered the Scythe of Elune to Malfurion so that he could use it to seal the worgen in the Emerald Dream.

She later travels with many night elves to Gilneas after sensing a wrongness there involving the worgen. She helped Genn to control his rage and retold him her story. During the attack on Gilneas City, she fought against Alpha Prime only to be rescued by the recently turned worgen Halford Ramsey. After they escaped the city, Lord Godfrey shoots Ramsey, and leaves them for dead. She managed to extract the bullet from Ramsey's body and brought him to Tal'doren where she was helping the worgen, Darius Crowley, among them.

Belysra was found by the worgen adventurer who was looking for Bradshaw. She warned him that he is followed by a Dark Scout. With her help he killed her and then he was sent to Tal'doren. After recovering the Scythe of Elune from Valorn Stillbough and later from the Forsaken who stole it, she once more battled the Alpha Prime. Belysra tried to banish Alpha Prime with the Scythe of Elune but before she could do so, a Forsaken dark ranger shot her in the arm. This caused her to drop the Scythe of Elune, and Alpha Prime signaled for the army of Forsaken to surround them. Alpha Prime took possession of the scythe, but just as he was about to finish Belysra off with it, the spirit wolf of Belysra's old lover — Arvell — killed Alpha Prime. With the death of their leader, the Wolf Cult scattered; leaving the Forsaken without their lupine allies and open to attack from the night elves and Gilneans.

She then aided the Gilneans in defeating the Forsaken and later brought news of the events back to Malfurion as the Gilneans join the Alliance, appearing as a level 40 priest trainer in the Howling Oak of Darnassus.

After the events in Gilneas, Belysra and Valorn traveled with the Scythe of Elune to Duskwood to further their studies of the worgen.[2] On orders from Tyrande Whisperwind they brought it to the Twilight Grove in Duskwood to give it to a druid adventurer traveling from the Dreamgrove.[3] However, Valorn was attacked from behind by Ariden and the Scythe was stolen, putting it in the hands of the Dark Riders who had coveted it for so long. As the druid began pursuing Ariden, Belysra stayed behind with Valorn.[4]

Belysra was in Darnassus during the Burning of Teldrassil, calling for her child, Ishala.[1] She refused to leave the Temple of the Moon and continued to try to put out the fires.[5]

She survived and was later encountered by Horde champions at Shatterspear Vale in Darkshore.[6]

Burning of Teldrassil
Main article: The Guidance of Our Shan'do#Notes