Benjamin Gibb is a Forsaken member of the Horde expedition to Draenor.

Benjamin Gibb was once a simple farmer in Lordaeron, taken by the undead plague. The Lich King saw a fearsome warrior within and raised him into a mighty death knight. Since the Lich King's fall, Benjamin serves the Horde vanguard, hoping to etch out a meaning for his cursed existence.[1]

He was sent by Sylvanas Windrunner to spy on Draenor. He is first encountered during his mission to Admiral Taylor's Garrison, where he was surveying the situation of ghostly human spirits before being discovered. They mistake him for a corpse and bury him in a mound of dirt. Found by the Horde Garrison Commander, he is recruited into the garrison army in Frostfire Ridge and becomes a follower after 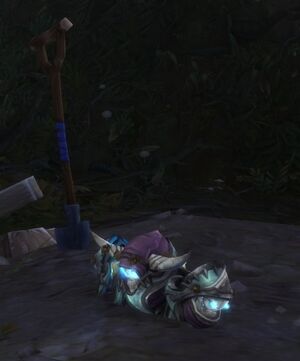 Benjamin was mistaken for a corpse and buried at Admiral Taylor's Garrison.