For the weapon enchant, see 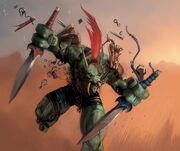 Berserking in the TCG.

Berserking is an active troll racial trait that increases melee, ranged and spell haste by 15% for 10 sec. Activating this ability does not trigger the global cooldown.

Try to use this ability at the same time as other haste effects, as these stack multiplicatively, making them more effective when used together than when used individually.