In order to get useful and realistic feedback from real users, some software companies deliver pre-release software (a beta or beta trial) to a select number of users to try it out and report bugs, make suggestions, or just give significant customers clear evidence of the state of the product and dispel rumors of vaporware.

What is a beta?

In terms of the software development, beta is usually the stage where all major feature implementation should be finished and the software is in the phase of bug fixing, refinement and stabilization before declaring a Final or Release candidate (sometimes called "Gold" as well). Sometimes major changes occur in this stage, but usually only in response to feedback during a beta trial.

Beta, of course, comes after the alpha stage where major feature implementation usually occurs, is known to be unstable, and not generally fit for anything more than internal trial of carefully selected users. The stage before alpha some call "Pre-Alpha", "Proof of Concept", or "Prototype".

These stages are semi-formal within the software industry, so "your results may vary".

A close beta version is one released to a select group for the same purpose, and is often preferred for commercial packages, so that a free beta does not become publicly available, allowing customers to evade the purchase of the product.

Open betas serve the dual purpose of demonstrating a product to potential consumers, and testing among an extremely wide user base likely to bring to light obscure errors that a much smaller testing team might not find.

Betas (and in a few cases alphas) represent the earliest opportunity for players outside the development team and a handful of selected "friends and family" to experience a game or expansion. This often makes betas a very exciting time to be playing a game, with testers able to experience new features and explore new content months ahead of other players.

As well as providing an advanced preview of the game as it will be released, betas typically see extensive changes and developments, often including repeated iterations of major features, reworking and remodeling of zones and instances, and myriad tweaks and adjustments to player abilities. New abilities may be introduced, found wanting, and removed, without ever seeing release; while others may see a striking range of possible implementations before a final model is settled upon. The developers often use betas to try out outlandish new ideas, often expressly warning testers that the changes may well be bad ones.

This process lies at the heart of what a beta is: an opportunity to test ideas not merely in the small, internal laboratory of the developers' own experience, but in the wider world of a diverse population of players, with dozens of different approaches to playing the game, and thousands of different opinions as to the merit of the latest changes. Betas offer not only the chance to experience content and systems as they will never again exist, but the opportunity to gain a glimpse into the minds of the developers, as they iterate through possible models for the coming release.

Access to features and content within a beta typically expands from a very limited starting point, until full (or nearly full) access to all planned features is available. For example, expansion betas usually start with players only able to access the starting zone/s for the new expansion, with further zones slowly added over weeks or months. Major features and systems are sometimes only added late in the beta, and more trivial aspects such as terrain detailing and critter spawning often come only near the end of the beta. For these reasons, testers are often reminded for much of the beta that the full picture has not yet been revealed, both in terms of tweaks to existing features and the addition of entirely new ones, with testers and indeed players without access to the beta, reading reports on its development, otherwise wont to get an inaccurate picture of the state of the expansion. Nonetheless, feedback is often essential from testers long before balancing and adjustments have concluded.

Beta testers also get the opportunity to witness some interesting and unintended bugs, including minor graphical glitches, broken events, quest lines and instances, and more extensive problems such as broken systems and server crashes. Some, such as terrain glitches causing player ghosts to spawn underneath graveyards (thereby trapping characters without hope of escape) may cause annoyance to all, while others, such as a broken ability allowing hunters to summon dozens of pets at once, may be gleefully exploited by many testers. Bugs may be frustrating, entertaining, or both, and often provide some of the most memorable moments of any beta test.

The Warcraft III: Reign of Chaos beta started on February 7, 2002 with an initial wave of approximately 5,000 players.[1]

Starting before March 2004, Blizzard started signing up Closed Beta Test testers from an unknown pool of people using an undisclosed method of selection. The Closed Beta Trial ran for about 7 months ending in more widely available stress test and then an open beta before final release around the end of November 2004.

The "Closed Beta" was the first phase of Blizzard's stress test. There were three servers and virtually no lag existed. This closed beta was also known as the "First Stress Test". The servers were split up into the following:

During the closed beta, content was delivered in various "pushes," beginning with the Human push. This was followed by Dwarf, Undead, Night Elf, Horde (orcs, trolls and tauren) and then the open beta. During most pushes, only the newest push's content was available -- human characters were unavailable, for instance, while players were testing the undead character experience.

Starting late September 2006, Blizzard started signing up Closed Beta Test testers for the first expansion, World of Warcraft: The Burning Crusade, from different playing areas. The plan was to introduce additional players to the beta test in subsequent waves, thus people that didn't make it in the starting lineup still had a chance at a Burning Crusade beta spot prior to launch.[3]

The Closed Beta started on October 12, 2006. They were split into two servers: Hellfire (PvE) and Blade's Edge (PvP)

Beta keys were given out to BlizzCon 2007[4] and Blizzard Worldwide Invitational 2008[5] attendees and Blizzard also gave out Beta keys to various organizations (fansites, etc.) for promotional reasons.[6]

Players who bought the Annual Pass were guaranteed access to the beta test.

The closed beta for Hearthstone: Heroes of Warcraft started on August 16, 2013 and the open beta started on January 21, 2014. 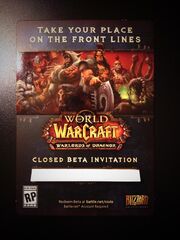 The alpha test was officially announced to start on April 3, 2014 which presages the beta test, but with no time frame given.[7]

Cards for closed Beta invites were given out at the PAX East conference in April 2014. The first beta testing began June 27th, 2014.

Shadowlands alpha testing invites started going out a couple days after April 6, 2020.[14] The beta for Shadowlands began on July 15, 2020 and more invites went out to a bigger variety of players. Many content creators received "access keys" where winners would get their account flagged by Blizzard Entertainment on September 2, 2020 if they won a certain giveaway/event that was setup by the creator.