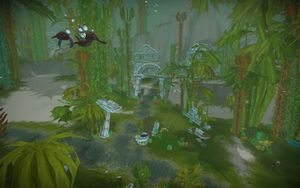 Biel'aran Ridge is a ridge found in the southern Shimmering Expanse. The ridge was once connected by a bridge, which is now the Severed Span to the Ruins of Vashj'ir. On this ridge lies several ancient structures now in ruins. There is a murky atmosphere around the ruins caused by Kvaldir who survived the naga assault. Gilgoblins can also be found near the sunken ships salvaging anything that might perk their interests.

It's from here that the Alliance/Horde forces try to make contact with their faction's fleet above.