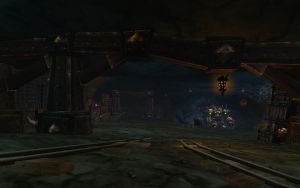 is a Bilgewater Cartel mining operation, located at the southern end of the Big Blossom Excavation, which itself is found in the southern half of the Summer Fields, between the Golden Pagoda and the Shrine of Seven Stars. Started under the orders of Garrosh Hellscream, the goblins seek to find the secrets of mogu power.

During the Siege of Orgrimmar raid, heroes enter this mine once again to gain access to the Vault of Y'Shaarj, however, the passage that once led to the vault has caved in. The other passage has recently uncovered a doorway leading into the Chamber of Purification where the heroes must free themselves of their pride.

After N'Zoth was freed from his prison, the mine was occupied by mantid who used it to hold incubation chambers for their eggs.

The Dark Heart of Pandaria scenario plays out here.