Not to be confused with Bilgewater Port. 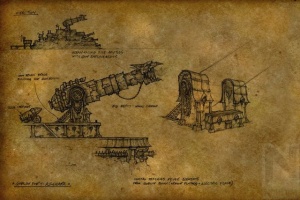 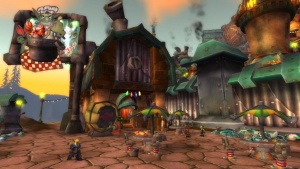 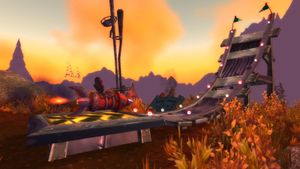 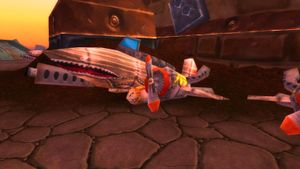 Flying machines lined up with priests in them.

From its roots as a humble "city-in-a-box" to the bustling metropolis it is today, Bilgewater Harbor straddles the line between myth and legend. At least, that's what the brochure says. The orc commanders might argue differently, though. It isn't exactly easy to maintain discipline in an otherwise lawless city where every vice you can imagine is available for just a handful of silver and debauchery is half off.[1]

Following the destruction of Kezan's port homes, many of the Bilgewater Cartel's surviving goblins fled for their lives, joining their new Horde comrades and settling in their new home in Azshara. The town's origins are often speculated on by non-goblins; Bilgewater Harbor sprang up in record time after the Kezanian refugees' arrival, and its' quintessentially goblin construction has fostered an atmosphere of debauchery and disorder. Orgrimmar's military has only recently set boots down in Bilgewater, but the harbor's value as a strategic front conflicts with some pushy goblins' desire to turn it into a new version of their ancestral home (abounding with gambling dens, pleasure houses, and other commercial luxuries). This cultural rift is likely to breed tension in the ranks of the Horde sooner rather than later.[2]

Bilgewater Harbor was presumably built on an artificial island in the middle of the Bay of Storms, possibly around the time the Bilgewater goblins were remodeling the entire region of Azshara. It acts as a naval port for the entire Orgrimmar fleet, launching boats and zeppelins to carry out the Warchief's vision for the future of Kalimdor and beyond.[1]

The majority of Bilgewater Harbor inhabitants are refugees who previously appeared in Kezan and/or the Lost Isles. The town is roughly divided in half between the military side, where Warlord Krogg and company send high-level players off to the Twilight Highlands, and the civilian side, where vendors, trainers, and some low-level quest givers can be found. Skull and crossbones signs warn those who inadvertently cross from one side to the other. The beach surrounding the port is home to wildlife that includes makrura, turtles, and more recently, seals. The latter particularly enjoy a rock on the southeastern shore but can be found throughout the area. Many ships are docked at the port, one of which - the Hull of the Foebreaker - shows up as its own subzone on entering, though not considered as such on the zone map.

When Warchief Garrosh Hellscream launched the attack against the night elves of Ashenvale, he had monsters - proto-dragons and magnataur - brought from Northrend by ships. The ships landed in Bilgewater Harbor and Garrosh personally came to observe them.[3]

Admiral Hatchet's fleet set off from the Harbor to Silverpine Forest. Warlord Torok blamed its goblins for giving the fleet alcohol that led to their catastrophic landing in the lands of the Forsaken.[4]