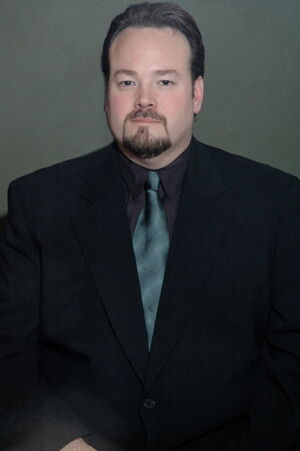 In 1991, he joined Blizzard and started work on the game Blackthorne and providing voices for Warcraft: Orcs & Humans, and became a full-time employee on August 1, 1994. He was able to work in many things: from game design to producing, manual concept and layout to voice casting, directing and acting to music, and being a member of several strike teams that provide high-level feedback to the development teams.[1] He served as a Vice President of Blizzard North and was a Director of Blizzard Entertainment from 1994 to 2003.

He and some colleagues left Blizzard because of frustration at the lack of communication with Vivendi management and a dearth of opportunities for them to participate in deciding Blizzard's destiny.[2] After Bill Roper left Blizzard, he went on to co-found Flagship Studios.

During his employment by Blizzard, Roper worked in the following games:

Besides being a producer, a musician or a story consultant, Roper voiced several Warcraft universe characters.

In Warcraft: Orcs & Humans, Roper voiced all the units.[3]

In Warcraft II: Tides of Darkness, Roper voiced the peons, grunts, footmen, the elves, and the ships of both Alliance and Horde, besides being the narrator.[4] In Warcraft II: Beyond the Dark Portal, he reprised his role as the narrator and also voiced Danath Trollbane, Grom Hellscream,[4] and Kargath Bladefist, besides of the use of the recycled sounds from Tides of Darkness.

In Warcraft Adventures, Roper did not do any voice roles. Blizzard was using all union actors for the game, and because Roper wasn't in the union, he would have needed a special contract. However, Blizzard had planned to re-use some of his recordings from previous games.[5]

In World of Warcraft, the recycled voices of the grunts from Warcraft III are used during the quest Counterattack!. Because Roper had left Blizzard, he did not reprise his role as Kargath or Danath in World of Warcraft: The Burning Crusade.