For other uses, see Black Citadel.

The Black Citadel was originally said to be Magtheridon's fortress in Warcraft III: The Frozen Throne. Situated in Hellfire Peninsula, this Black Citadel was later retconned into actually being the Black Temple of Shadowmoon Valley. For a full analysis of this issue, please see Black Citadel and Temple.

This article concerns the event as it was originally told in The Frozen Throne with additional material from the Warcraft RPG. 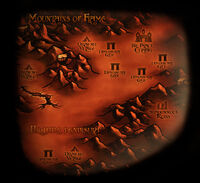 Map from The Frozen Throne showing the Black Citadel.

The Black Citadel was a menacing structure in the Hellfire Peninsula region of Outland. Shortly after the destruction of Draenor by Ner'zhul's many portals, a pit lord named Magtheridon used the Black Citadel as a throne from which to rule over Outland. Magtheridon used the portals Ner'zhul created to summon members of the Burning Legion, bolstering his armies and hold on Outland.

Illidan Stormrage and his lieutenants - Lady Vashj of the naga, Kael'thas Sunstrider of the blood elves and Akama of the Broken - led their followers through Outland in an effort to hide Illidan from his master, Kil'jaeden. He attempted this by destroying all portals in Outland, the access points to the Twisting Nether from which the Burning Legion could enter. Thinking himself finally safe from Kil'jaeden's wrath, Illidan shifted his goal from simple self-preservation to conquest. He set out to take control of Outland from the cruel Magtheridon and rule over Outland in his place.[1]

The Citadel, however, was heavily guarded. Magtheridon controlled a variety of demons, including the corrupted fel orcs that relentlessly attacked Illidan's forces. Infernal machines sat silently along the walls to hurl devastating attacks on intruders. A huge abomination named the Butcher lingered in the dark recesses, waiting for prey. Six fel orc blademasters were set up to guard: Bonethirst, Maim, Bloodgrin, Nera'thor, Sagra'nel and Rend. Guarding the final areas were the Master of Pain and Mistress of Torment along with an army of Burning Legion minions. In order to get through these defenses, Illidan enlisted Lady Vashj to attack the Citadel by water and Akama to infiltrate Magtheridon's inner chambers through stealth.

Illidan and his company succeeded in defeating Magtheridon and named themselves the new rulers of Outland. The victory was short-lived as Kil'jaeden appeared to remind Illidan that he could not escape the far-reaching gaze of the Burning Legion, not even in the Black Citadel.[2]

Illidan the Betrayer stands as the lord of Outland, and rules his domain from a massive, black iron ziggurat called the Black Citadel.[3] Ner'zhul was originally responsible for this hulking edifice — but now blood elves, naga, and Illidan's few other allies roam its corridors. The naga live in underground sewers, and the upper levels teem with blood elves, traps, evil and death. Rumors tell that beneath the citadel sprawls a great prison; trapped within are heroes from previous wars, languishing in unknown solitude.[4]

The Hellfire Peninsula spreads before the distant Black Citadel.[4]