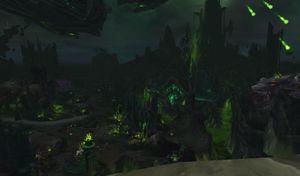 The Black City seen from a ridge.

The Black City is a Burning Legion stronghold on the Broken Shore. Its structures rose from the ground in moments, spewing forth demons by the hundreds in the blink of an eye.[1] Many captured, tortured, mind controlled and killed Argent Lightbringers and Dawnbringers can be found inside the city.

The Alliance and Horde have to raze it during

[98] The Battle for Broken Shore. The city is split in two by a lake of lava surrounding a soul engine, each side of the city being more or less a mirror of the other one, with the same kinds of demons engaging in the same activities.

Doom Shrooms, Moongrasses, Chaos Clovers, Bleakthorns and Felblooms are local plants that can be clicked on to provide buffs.

It is not a subzone after the battle, but is shown on the map. After the assault on Broken Shore, the lake is drained of lava and the area is split into Dark Stockades, Shadow Fracture, Soul Ruin, and Garrison of the Fel. 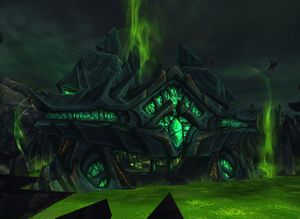 The soul engine and the lake splitting the city.