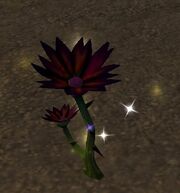 A Black Lotus in the Burning Steppes.

A Black Lotus is a rare herb that can be gathered with Herbalism (300).

Black lotus can be smoked in hookahs along with dreaming glory. The combination of the two herbs induces a relaxing, numbing sensation.[1]

Black Lotus can be found in Winterspring, Eastern Plaguelands, Burning Steppes, Silithus, and outside the instance portals in Dire Maul. It is rare in all of these places and never appears anywhere else.

It can also very rarely be obtained from harvesting the corpses of plant-like mobs such as Bog Lords in Outland. The chance to get a black lotus appears to increase with the monster's level, so chances are higher in places like Skettis, The Steamvault, Serpentshrine Cavern and heroic Coilfang Reservoir instances.

Each of the spawn zones has a small set of spawn points for Black Lotus. Only one Black Lotus will spawn at a time in the zone. Check sites which focus on gathering WoW data to see maps of the spawn locations. It is estimated that the respawn rate is 1 hour, possibly spawning on the hour.